Hosts Kolkata Knight Riders will face fifth placed Sunrisers Hyderabad in Match 38 of the Indian Premier League T20. KKR have won just four games from nine matches and will need to get a home win in order to stay in the top four. 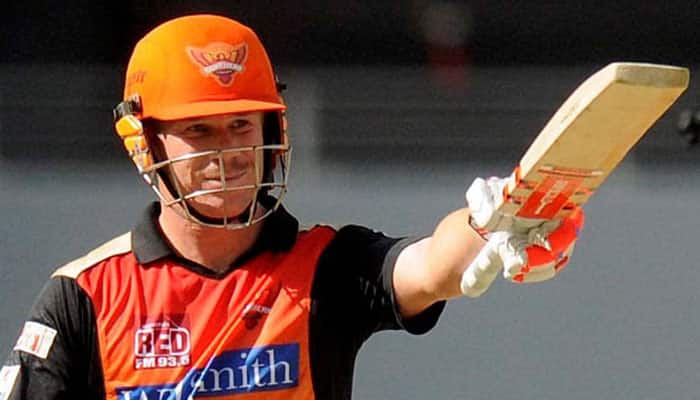 New Delhi: Hosts Kolkata Knight Riders will face fifth placed Sunrisers Hyderabad in Match 38 of the Indian Premier League T20. KKR have won just four games from nine matches and will need to get a home win in order to stay in the top four.

Meanwhile, SRH have enjoyed a mixed run so far winning four and losing four games with having played one game less than their rivals.

SRH come from a commanding winning display against the Chennai Super Kings where they won the game by 22 runs. KKR come to this game after losing a ten-over tie against Royal Challengers Bangalore.

A win for David Warner's side will help them climb up to the top four position on the points table. For Gautam Gambhir, picking up the two points will be crucial as they could stay in the hunt. KKR had will be hoping to make the home game conditions work in their favour.

The last time SRH and KKR met in April 2015, the former won the match with David Warner starring with the bat for them in a rain curtailed game.

As two IPL sides clash who look to gain momentum, we highlight a key player from each side who could help his side emerge victorious at the Eden Gardens, Kolkata.

The Aussie stalwart has been in supreme form and that was visible in the game against CSK. Warner has led SRH very well so far and has made sure they are sticking well and getting results. Warner has been lethal so far and has scored 378 runs so far in the tournament. He will be crucial again alongside Shikhar Dhawan upfront. His approach against the KKR spinners will be the key. Warner knows SRH need a big score to perform well.

The West Indian has been KKR's main man so far chipping in with both bat and ball. Even in the field he has been lively. Russell has taken eight wickets so far and has bowled well. He has also scored 225 runs in six games. The West Indies all-rounder will be the key again down the order. He has all the abilities to win the game on his own and has been instrumental against KXIP and CSK. Even in the last match against RCB he batted well to help KKR put a good total in 10 overs.