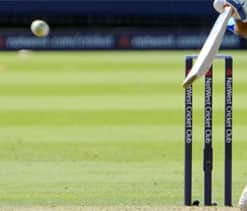 Jamshedpur: In-form opener Faiz Fazal (91) missed out on his century even as the Ranji Trophy Group A match between Vidarbha and host Jharkhand ended in a draw on the final day at Keenan Stadium here on Wednesday.

Vidarbha had scored 218 runs in reply to Jharkhand`s first innings total of 332. Jharkhand made 161 for nine in their second essay.

Resuming at an overnight score of 83 for three, Jharkhand batting line up collapsed as pack of card as they lost six wickets for 116 runs in the morning.

Overnight batsman southpaw Saurabh Tiwary (who was 21 at stumps yesterday) and skipper Shahbaz Nadeem put up stiff challenge before the Vidarbha bowlers and stitched a valuable 62 runs for the fifth-wicket before Nadeem was bowled by S Ruikar at team score of 146.

Nadeem played a scintillating knock, hitting 40 off 23-delivery with the help of six fours and a six.

Three balls later, Tiwary followed the suit notching up highest 44 runs studded with three boundaries and a six off 68-balls.

Tiwary stepped out for a drive but handed a catch to Ravi Jangid off Akhshay Wakhare.

After Tiwary`s dismissal, Jharkhand lost three quick wickets in the form of Bhavin Thaker (0), Sunny Gupta (3) and S S Rao (0) while Varun Aaron was not out at 8.

Vidarbha got off to a good start as their in-form opener Fazal and Akshay Kolar (23) paired for 55 runs before spinner Samar Quadri, who had bagged six wickets in the first innings, struck the first blow having Kolar caught by Aaron.

Jangid stepped in to join Fazal, who exhibited excellent shots all around the ground, and they
together stitched 53-run second wicket partnership. Quadri struck for the second time having Jangid leg before for 15.

Fazal, who was settled at the other end, amassed 91 with the help of 13 fours before he was bowled by speedster Aaron.

S Shrivastav was on 8 and R R Parida was on six when the match ended.

Maturity and calmness of Kallis will be missed, says SA Coach Russell Domingo