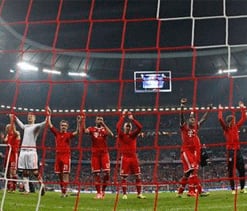 Bayern were crowned German league champions a fortnight ago and are 20 points clear of second-placed Dortmund in the table.

Both sides come to the Allianz Arena clash openly admitting they have other priorities.

Bayern are into the semi-finals of the Champions League and have made no secret of their desire to become the first team to defend the title.

"The game has some statistical value, but nothing more," chairman Kalr-Heinz Rummenigge said of `Der Klassiker` against Dormtund, while director of sport Matthias Sammer was damning in his appraisal.

"I have never seen it written on a list of achievements: `prestige won`, so it`s not a decisive game for us," said Sammer.

Nevertheless, Bayern`s bosses will be extremely irritated by a defeat to Dortmund, especially after last Saturday`s shock 1-0 defeat at Augsburg and the 3-3 draw at home to Hoffenheim.

Ever the diplomat, Guardiola talked up Dortmund, especially after their 2-0 win over Real Madrid on Tuesday as they bowed out of the Champions League after losing the quarter-final 3-2 on aggregate.

"We know how good Dortmund are, it`s important for both teams to show how good they are," said the Spaniard.

"I watched the Dortmund match against Real Madrid game and they were amazing.

"We`ll need to be well prepared to face them on Saturday."

Despite Guardiola`s words, relations between Germany`s top two clubs have soured recently, especially since Borussia won back to back league titles in 2011 and 2012 which culimnated in Dortmund`s 5-2 routing of Bayern in the 2012 German Cup final.

"The relationship was better in the past," Dortmund`s CEO Hans-Joachim Watzke told German magazine Kicker.

"We got too close to Bayern in recent years and they have registered our growing popularity in Germany.

"Anyone who wants to have a good relationship with Bayern shouldn`t get too close to them in terms of sporting success."

Having bowed out of the Champions League, Dortmund have prioritised next Tuesday`s German Cup semi-final at home to VfL Wolfburg in the only competition they can still win.

"This is about collecting three important points which could do us a world of good," said Dortmund coach Jurgen Klopp.

"This is a sensational time to play Bayern Munich, between Real Madrid and Wolfsburg."

But Dortmund`s CEO Hans-Joachim Watzke said the Wolfsburg match is the priority.

"We`re not going to Munich to give anything away, but if you look at the next two games, the cup semi-final for us is the higher priority" confirmed Watzke with Borussia hoping to face Bayern in the final at Berlin`s Olympic Stadium on May 17.

Dortmund`s Poland striker Robert Lewandowski will be making his final appearance with the away team at the Allianz Arena before he joins Bayern at the end of the season.

Likewise, Bayern`s Germany star Mario Goetze will be facing his former club having switched to Munich from Dortmund last July.

Guardiola is expected to rotate his squad, but both Javi Martinez and Bastian Schweinsteiger could start having sat out Wednesday`s Champions League victory over Manchester United with suspension.

Having fielded a third-choice defensive midfield pairing of Oliver Kirch and Milos Jojic against Real, Klopp is set to extend the experiment on the back of an impressive display from the duo.

There are two key matches in the battle to avoid relegation with bottom side Eintracht Braunschweig at Freiburg, who are just two places from the relegation zone.

Likewise, Hanover 96, who are two points from the bottom three, entertain 16th-placed Hamburg, who are battling to avoid an historic first relegation from the Bundesliga.
Friday