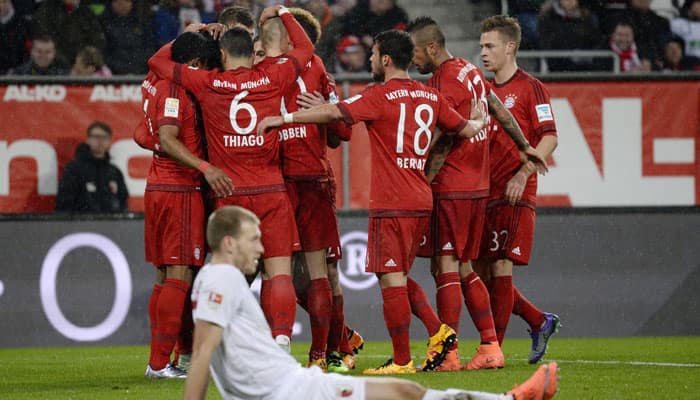 Berlin: Holders Bayern Munich reached the third round of the German Cup with a 3-1 win over Augsburg on Wednesday while second-division Union Berlin took injury-hit Borussia Dortmund to penalties.

Goals by Philipp Lahm, Julian Green and David Alaba sealed Bayern`s win at the Allianz Arena, while Borussia, last season`s finalists, endured nervous moments before beating Union 3-0 in a shoot-out after it finished 1-1 in Dortmund.

In Munich, Bayern coach Carlo Ancelotti rested a host of stars for Saturday`s away Bundesliga clash -- also against Augsburg -- and next Tuesday`s Champions League clash at PSV Eindhoven.

Alaba, Holger Badstuber, Arjen Robben, Arturo Vidal, Xabi Alonso and Robert Lewandowski were all on the bench while US striker Green made a rare start.

Bastuber came on for the last ten minutes for his first appearance in nearly nine months after injury.

"In the first galf we controlled the game, but we weren`t so good after the break," admitted Ancelotti.

"I`m very pleased that Holger is back, he worked hard for it."

Bayern went ahead with two minutes gone when Thomas Mueller fed Lahm and the Bayern captain drilled home his shot.

Mueller then floated in the cross which Green headed home to make it 2-0 on 41 minutes.

Augsburg pulled a goal back on the counter attack when Ji Dong-Won cut in and blasted his shot home from a tight angle on 69 minutes.

But Alaba came on with five minutes to go and rifled home Bayern`s third in the 94th minute to settle the result.

Dortmund, missing a host of injured stars like Pierre-Emerick Aubameyang and Marco Reus, went through after a scare.

Dortmund took the lead thanks to a first-half own goal from ex-Dortmund defender Michael Parensen, but Union striker Steven Skrzybski levelled with nine minutes left

Goalkeeper Roman Weidenfeller was Dortmund`s hero with two saves in the shoot-out, while Ousmane Dembele, Matthias Ginter and Mario Goetze netted their spot-kicks.

Schalke scrapped into the third round with a nervy 3-2 win over second-division Nuremberg.

But Ghana defender Abdul Rahman Baba, on loan from Chelsea netted an own goal, then Tobias Kempe converted a penalty for Nuremberg to set up a tense final 20 minutes.

Cologne beat Hoffenheim 2-1 as Anthony Modeste, the Bundesliga`s top scorer, netted a 91st-winner in extra time as Hoffenheim suffered their first defeat of the season.

There were several upsets elsewhere.

Freiburg were beaten by second-division Sandhausen and Eintracht Frankfurt beat Ingolstadt on penalties in an all-Bundesliga clash.