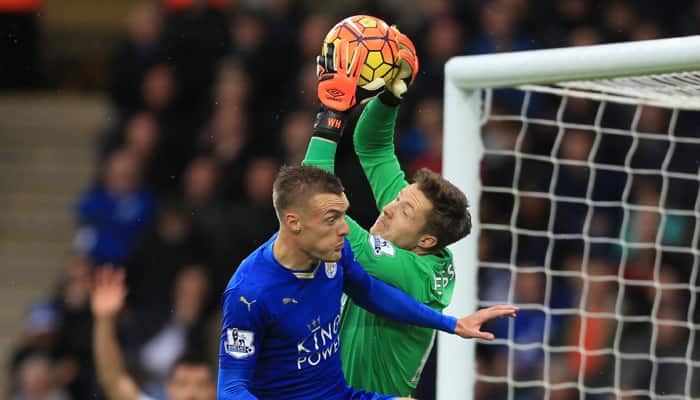 New Delhi: Leicester City's Jamie Vardy and Watford's Odion Ighalo have sent Premier League's goals chart surging this season. Both forwards have been in supreme form and have excelled for their respective clubs on the pitch.

Vardy (12) and Ighalo (7) have scored 19 goals between them, which is more than what Manchester United (17) and Chelsea (16) have managed to score as a team so far this season.

Vardy's excellent rich vein in scoring goals has seen Leicester stay third in the EPL standings. Vardy has also scored in nine successive EPL games and is having the moment of his life. The England international was even compared to Gabriel Batistuta by manager Claudio Raneiri recently.

Meanwhile, Odion Ighalo has been another sheer classy striker who has been amongst the goals. Watford lie 12th in the table and was promoted this term from the Championship. Ighalo is a pivotal player for the side and Watford's journey will depend on the 26-year-old Nigerian.

Manchester United have tightened up their screws defensively under Louis van Gaal, but upfront they have been lean with only 17 goals to their name. Wayne Rooney has been left a frustrated figure with lack of service and his own personal form that has dipped. Gaal looks heavily dependent on creative players to get his side the goals and the number so far looks worrying. Juan Mata leads United's tally in EPL this term with four goals.

Chelsea on the other hand has had a dismal start to the season and its leading players like Diego Costa and Eden Hazard has failed to do justice in getting goals. Jose Mourinho's side lie 16th in the table and has managed to score just 16 goals so far in 12 games. Their top scorers so far have been Ramires, Willian and Costa (2).

Vardy and Ighalo will want to keep scoring more goals as both United and Chelsea need some catching work to do in having an impressive scoring tally.