The Uruguay stalwart also said the ISL should look at getting younger players to play. 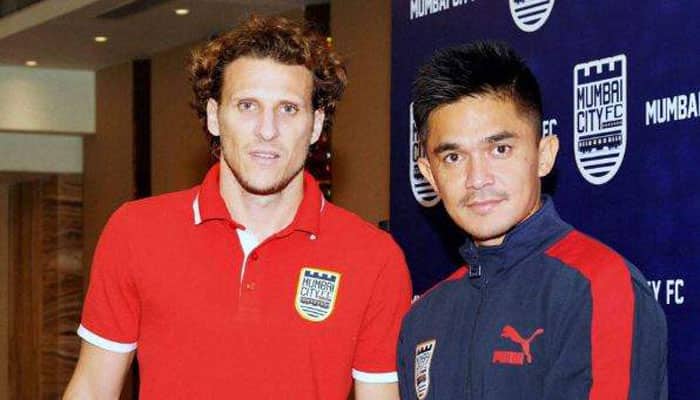 Mumbai: Echoing identical views about the need for a unified football league in the country, Mumbai City FC’s marquee player and star Indian striker Sunil Chhetri wanted it to be longer too for the betterment of the country’s football.

“I have been here for a couple of months and can see some really good and talented players like Sunil (Chhetri) and some others, who can score goals, and defenders too. About ISL – I think they need to sort it out between the other league and join everything,” said former Uruguay international and Mumbai City FC skipper Forlan at a media interaction.

“It’s good for me at my age (37) to play here for three months. But you have to see the future of the players. All leagues are played for nine or ten months. In Europe the top players play many games – around 60 games. It’s between 40-50 games for others.

Chhetri, sitting beside Forlan, agreed to the Uruguay legend’s views on the need for a unified league.

“One league is going to be good and everyone understands this. A longer league is beneficial for everyone, and a more competitive set-up. How and when they are going to do it is not with me but I am sure they are working on it.

“One longer league with 18-20 teams is necessary. It will provide more opportunities for Indian players. A more professional set-up is what we all will love to see,” he said.

“Some of the Indian players can play in ISL, but not everybody. They are training which is different from playing. Sunil is playing here and he can go back and play (in I-League), in total for 8 months, but changing from one team to another is not easy,” Forlan pointed out.

The Uruguay stalwart also said the ISL should look at getting younger players to play.

“I see players doing well, but may be they need to get younger players which would be better to improve Indian football. They need to get good coaches as well.

Chhetri was happy that Mumbai City FC have qualified for the first time for the play-offs with one game in hand.

“I feel very happy. Last year we could not qualify but this is the first stage (in play-offs). When I joined (after stint with I-League club Bengaluru FC), the team was in a very good position. Everyone looks fit. We will give our best but will take it one game at a time,” Chhetri said.

“The first season, I was not there. Second season we had a good team, but we just lost our track. One of the reasons we have done well is sitting on my right (Forlan). He has been very influential on and off the field.

“We also have a very able coach and coaching staff. We are in sync. We are heading in the same direction and when this happens more often than not we will taste success. There are no groups here. We are united but not complacent.

“We are going to try our best to win the next game (against Delhi Dynamos here on December 3). There has been no calculation about whom to avoid (in semis). None from coach to captain. We are happy that we have qualified with one game in hand.

“We want to be a confident team going into the semis. We will try to win the last game as well as the next one, semis. We have a great away result but had not done well at home. Suddenly we have won two out of two at home. We have to build on it, work harder. The momentum is with us,” he said.

Asked about his position in the team’s line-up, Forlan said from childhood he always played as a forward.

“I like having freedom to play wherever I feel comfortable. I am comfortable in forward position where I have always played as a kid. We have really good players, Indian or foreign. Everybody who has had an opportunity has done well. We are all enjoying each other’s company, playing and training,” he said.

He was not sure whether he could take part in a longer league in India.

“Entire season in India? I don’t know what I am going to do once the league ends. I have to see, get whole information before deciding,” Forlan said.