Wolfsburg down Mainz to go second in Bundesliga

VfL Wolfsburg went provisionally second in the Bundesliga as they inflicted Mainz`s first defeat of the season with a 3-0 win on Sunday. 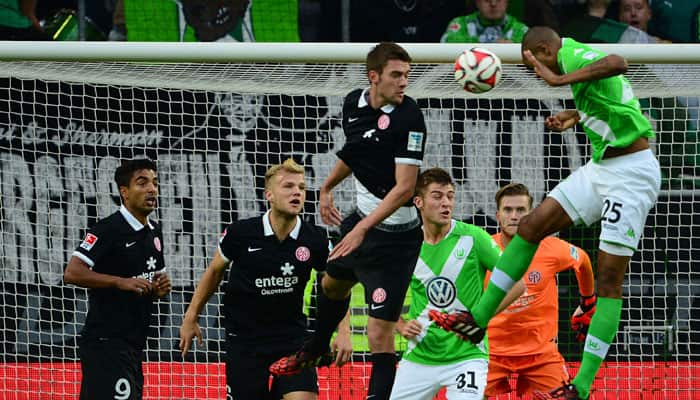 Berlin: VfL Wolfsburg went provisionally second in the Bundesliga as they inflicted Mainz`s first defeat of the season with a 3-0 win on Sunday.

Goals by Naldo, Ivan Perisic and Daniel Caliguri gave the hosts the three points and second spot on goal difference from Hoffenheim -- Borussia Moenchengladbach could regain second with a victory or draw over leaders and defending champions Bayern Munich later on Sunday.

Wolfsburg -- for whom Belgian playmaker Kevin de Bruyne was outstanding -- took the lead when Brazilian defender Naldo headed home from a corner after only 15 minutes.

Mainz`s goalkeeper Loris Karius denied De Bruyne when he pushed the former Chelsea midfielder`s fierce strike over the bar on 58 minutes, but Wolves` second goal came from the resulting corner.

Naldo was again left unmarked in the area and he headed on for Croatian international Perisic to guide his header past Karius from close range.

Caliguri made sure of the win on 87 minutes when he tapped home a cross by Belgium Under-21 international Junior Malanda.

"You could see that we were really on top of things. Mainz started strongly, but we showed our potential," enthused Wolves` coach Dieter Hecking.

"The way we played, Mainz couldn`t take anything off us and they were really a class below us."

On Saturday, Borussia Dortmund`s horror run of domestic league results continued as a 1-0 defeat -- their fourth successive loss -- by Hanover 96 left them 15th and just a point above the relegation places.

They have the daunting task of facing Bayern Munich next Saturday.

Dortmund`s terrible domestic form is in stark contrast to their Champions League campaign, where they top their group with three straight wins after Wednesday`s impressive 4-0 victory at Galatasaray.

In a bid to bring their European form to the Bundesliga, Dortmund even had special permission to face Hanover in their Champions League strip, but to no avail.

Roberto di Matteo failed to pick up his third straight win as Schalke 04 coach on Saturday evening as the Royal Blues lost 1-0 at ten-man Bayer Leverkusen in the battle between two of Germany`s Champions League sides.

Turkey midfielder Hakan Calhanoglu settled the matter with a superbly-struck free-kick on 53 minutes although the hosts suffered a blow with the loss of German international midfielder Stefan Reinartz for three months after fracturing an eye socket.

Bottom side Werder Bremen sacked coach Robin Dutt on Saturday, less than 24 hours after his side`s 1-0 defeat at home to Cologne.

The 49-year-old is the third Bundesliga coach casualty this season after Mirko Slomka (from Hamburg) and Jens Keller (Schalke 04).

Bremen`s Under-23 coach Viktor Skripnik has been appointed as caretaker coach, with ex-Germany midfielder Torsten Frings during the search for Dutt`s successor.