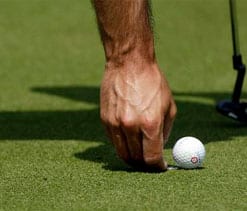 Singapore: Better times are around the corner for regional golf after a lull in fortunes left some players struggling to make a living, Asian Tour CEO Mike Kerr says.

Kerr called it a "challenging" time for Asian golf with sponsors hard to find and only seven confirmed stroke play events on this year`s Asian Tour schedule so far.

But he said the Asian Tour was about to announce another four tournaments for the coming months and hoped to have a total of 25 by the end of the year, the same as last season.

Kerr`s comments, in an interview with AFP, came after golfers at last week`s Championship in Singapore voiced unhappiness at a lack of playing opportunities.

"I can understand some of the frustrations that they may have at this point," Kerr said at the Asian Tour`s headquarters in Singapore on Tuesday.

"There have been some external factors that have meant that maybe our ability to announce events has been somewhat restricted.

"But I think come the end of the year, we`re going to have a similar number of tournaments (to last year), if not more, in what is a fairly tough year."

Kerr said uncertainty over elections in India and also political unrest in Thailand, both key countries for the Asian Tour, had hit attempts to organise tournaments this year.

But he conceded that with playing opportunities staying flat for at least the short-term, some golfers in the region may be forced out of the game.

"This is just like any other sport and indeed any other profession, where those who are successful continue, and continue to grow and rise to the top," he said.

"Those who are not so successful struggle and may have to find something else to do. It`s tough but that`s the world that we live in, that`s reality.

"All I can continue to do is to help to steer the organisation... and deliver more and more opportunities for the players to earn money. But I can`t come inside the ropes and tell them what club to hit." After a boom period for the Asian Tour schedule, growth has petered out, hit by leaner economic times and more competition following the arrival of the rival OneAsia tour in 2009.

The region`s flagship events have suffered with the Singapore Open, once touted as "Asia`s major", sidelined and the Hong Kong Open also without a title sponsor.

Last week`s Championship was transplanted from South Korea to Singapore at the last minute after also losing its main backer, Ballantine`s, after a run of six editions.

At the $1.5 million tournament, Singaporean veteran Mardan Mamat told AFP there were concerns among players over their ability to make a living in the current climate.

"I think most of the players are not very happy with the schedule of the Asian Tour," said the father of five, whose prize money for the year stands at just over $4,000.

"You need to play good at these big events otherwise you won`t make much income. You play a $300,000 tournament, you need to finish top-five to make any money," he added.

Australia`s Matthew Griffin, who won a high-profile 2012 court ruling which forced the Asian Tour to let its players compete on OneAsia, said surviving on tour was increasingly hard.

"It is tough, especially as the competition level`s so high now that when you enter $300,000-$400,000 events it`s not easy to just finish in the top 10 and make good amounts of money," he said. "So you need the bigger events to be able to survive."

Kerr said he would meet players next week and try to address their concerns.

But in a sign of the changing landscape, he also said he couldn`t rule out a potential alliance with OneAsia -- something which he had previously dismissed.

"I don`t think that anything is off the table. I think there are two fundamental issues, one is TV rights and the other is structure," he said.

"One way or the other, there is going to be consolidation in the Asian market... But that doesn`t necessarily mean that Coke and Pepsi have to jump into bed together," he added.

Four could topple Tiger from No. 1 at Players