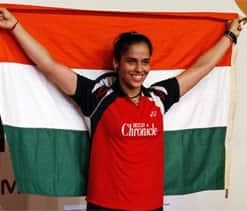 Kuala Lumpur: Indian badminton star Saina Nehwal and Olympic champion Li Xuerui of China have been put in same group for the BWF Super Series Finals, that will be played here Dec 11-15, after the draws were announced at the Kuala Lumpur Badminton Stadium here Tuesday.

Japan`s Minatsu Mitani and Yeon Ju Bae of South Korea are the other players in Group B besides Saina, who is seeded second, and Xuerui.

"I have worked hard and prepared well for the tournament. I feel I am ready to challenge in Kuala Lumpur," said Saina in a statement.

Saina`s first match will be relatively easier as she will face World No.13 Minatsu against whom she has a 3-1 record and they too will be meeting for the first time this year.

Next up will be Olympic champion Xuerui. Saina has a 2-5 record against the top-rated Chinese. The 23-year-old Saina will have a tough outing against the Chinese in their first match of 2013. Their last meeting was in the 2012 edition of the Finals.
Saina will finish her group encounter against against World No.7 Yeon, against whom she has a 5-4 win-loss record.

Saina said there won`t be any easy matches.

"Whatever the draw is, there will be no easy matches in the Superseries finals and I am completely prepared for it. I will take each match as it comes and give my best," said Saina.

China`s Shixian Wang, Thai Porntip Buranaprasertsuk, South Korean Ji Hyun Sung and Chinese Taipei`s Tzu Ying Tai are in Group A of the year-ending $500,000 showpiece event. The top two from each group will progress to the semi-finals.

Though Saina has not won a single tournament this year, she has maintained the No.2 position in the Super Series rankings this season, enabling her to qualify for the Dec 11-15 tournament.

With three Super Series semi-final appearances in the 12-leg calendar, Saina, an Olympic bronze medallist qualified quiet for the tourney where she finished runners up two years ago in 2011.

Saina, who is also a two-time semi-finalist here, does have a good chance if she finds her footing and form at the event which pits the eight best players of the current year.

Chinese Taipei`s Tai, who won the Malaysia Open, is lucky to enter the event because tournament regulations stipulate a maximum of two players per country, automatically ruling out No.8 Yihan Wang with compatriots Shixian and Xuerui ahead of her.