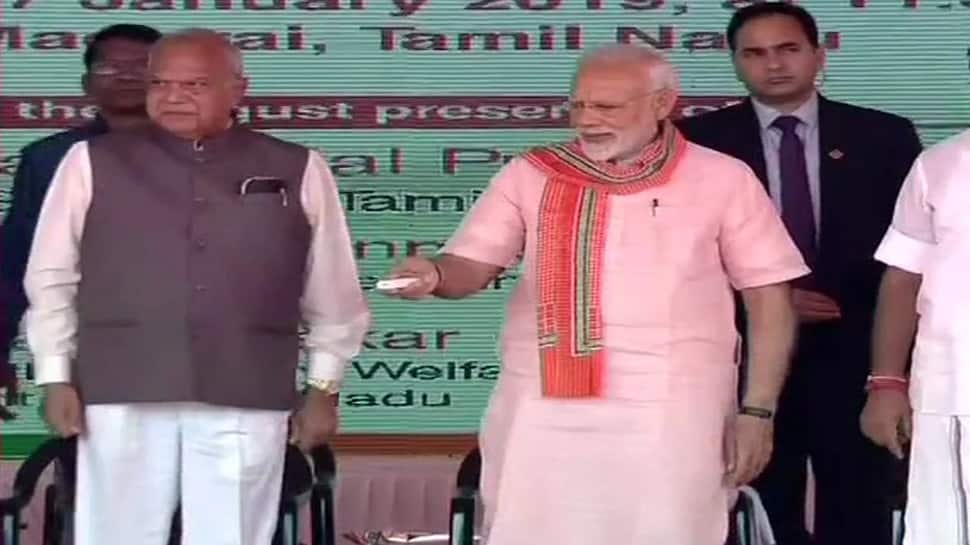 MADURAI: Prime Minister Narendra Modi on Sunday laid the foundation stone for the All India Institutes of Medical Sciences (AIIMS) in Madurai. To be built at a cost of Rs 1,264 crore, it will be the first such facility in Tamil Nadu. The proposed 750-bed modern AIIMS, on its completion, is also projected to offer 100 MBBS seats. It is expected to go on stream in 2022.

The PM also inaugurated super-speciality blocks at medical colleges in Rajaji, Thanjavur and Tirunelveli. These blocs would have high-tech diagnostic equipment and facilities including Cath lab.

Speaking at the event, the Prime Minister said that his government's priority is to make health care is affordable. "The NDA government is giving great priority to the health sector so that everyone is healthy and the health care is affordable. Today I am happy to inaugurate the super speciality hospitals in Madurai, Thanjavur and Tirunelveli," he said.

The PM arrived in the city on Sunday amid protests by Marumalarchi Dravida Munnetra Kazhagam (MDMK). Ahead of his arrival, MDMK chief Vaiko staged a black flag demonstration against the PM alleging that he had betrayed the interests of Tamil Nadu. Vaiko along with other protesters was detained.

Releasing black balloons, the protesting party cadres raised slogans against Modi alleging that he betrayed the interests of Tamil Nadu on Cauvery and other issues. The MDMK cadres claimed that the Centre had accorded "permission to projects like neutrino and hydrocarbon extraction" which, according to them, would have an adverse impact on the livelihood of the farmers and also affect the common people.

Tamil Nadu unit BJP president Tamilisai Soundararajan and Union Minister of State for Finance and Shipping Pon Radhakrishnan strongly condemned MDMK for staging the protest ahead of the PM laying the foundation for a big project beneficial to the state. The BJP also put up posters sarcastically "welcoming Vaiko".

When the Centre had in its 2014-15 budget announced that new AIIMS would be set up in various parts of the country, Jayalalithaa had requested one such facility for Tamil Nadu. Following her plea, the Centre announced in the 2015-16 budget that an AIIMS would be set up in the state. After her death, Palaniswami had assured the state's full support to facilitate early commencement and completion of the project for realising late chief minister dream.

The Madurai AIIMS had got the approval of the union cabinet in December 2018.

#MaduraiThanksModi vs #TNWelcomesModi vs #GoBackModi: Twitter war over PM's visit