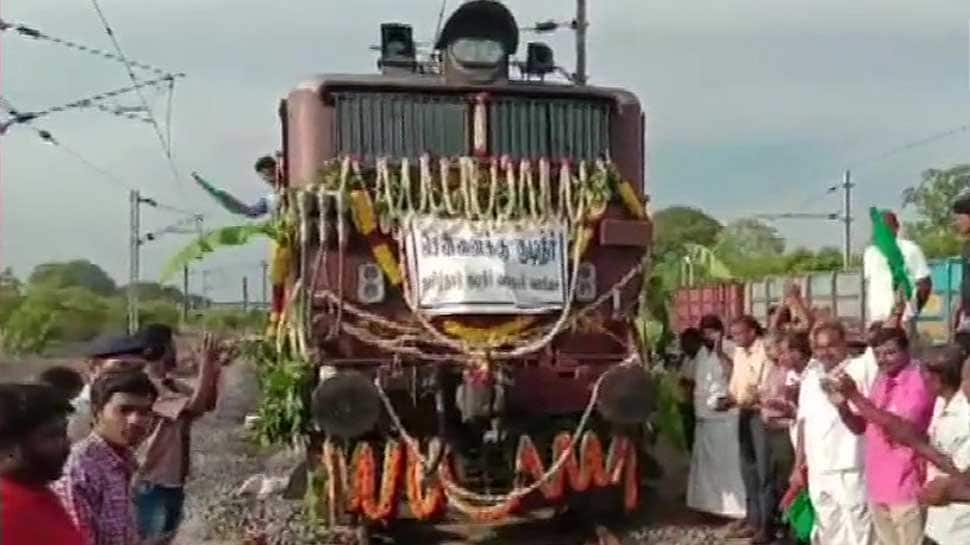 Chennai: In what is likely to bring some respite to people in the drought-hit Chennai, a special train carrying 2.5 million litres of water is set to arrive in the city on Friday.

According to a Southern Railway official, a special 50-wagon train carrying water from Tamil Nadu's Vellore district will reach Chennai on Friday afternoon.

News agency ANI reported that the first train carrying water from Jolarpet railway station in Vellore district to Chennai left for the state capital this morning.

Tamil Nadu: The first train carrying water from Jolarpet railway station in Vellore district to Chennai, started from the station this morning. The state government had announced to bring in water from Vellore by rail wagons as Chennai is facing water crisis. pic.twitter.com/uepfcYNegt

Each wagon of the special train, which was flagged off from the Jolarpet station, has the capacity to carry 50,000 litres of water.

The special train was supposed to reach Chennai on Thursday, but leakages in valves connecting the tank to the railway station forced the authorities to push back plans by a day, the officials said.

Tamil Nadu government ministers are expected to be present at the inauguration of the unloading of the water when the train reaches Villivakkam station here.

The state government led by Chief Minister K Palaniswami had earlier announced to transport 10 million litres of water daily by rail from Jolarpet to meet the water demands of the parched Chennai.

The CM said that a sum of Rs 65 crore had been allocated for this purpose.

Currently, the Chennai Metropolitan Water Supply and Sewerage Board (Chennai Metro Water) is supplying about 525 million litres per day (MLD) in the state capital.

While the Cholavaram (full capacity 1,081 mcft) and Redhills (full capacity 3,300 mcft) reservoirs and Chembarambakkam lake (full capacity 3,645 mcft) that supply water to Chennai have run dry, 16 mcft water is left in the Poondi reservoir (against a full capacity of 3,231 mcft), according to the Chennai Metro Water Corporation.

Water shortage has forced some schools to shut, companies to ask employees to work from home, and hotels to ration water for guests in Chennai.

Besides Chennai, several other cities, including the national capital Delhi and technology hub Bengaluru, are also grappling with water shortages.

People living on the outskirts of Chennai are blocking roads and laying siege to tanker lorries because they fear their water reserves are being sacrificed so city dwellers, businesses and luxury hotels do not run out.

Ground-water levels in Chennai and in regions around the city have been falling due to lack of adequate rainfall.