Taking you on an unforgettable journey into the Mumbai underworld is the World Television Premiere of Indian political drama 'Daddy' on 18th July. 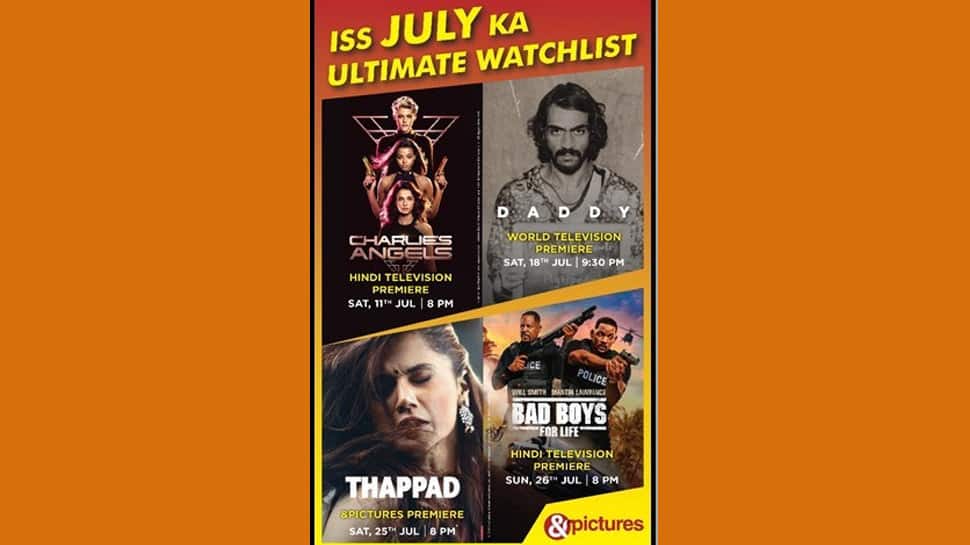 Miss going out on weekends? And, even more, miss making plans for the weekend? Well, not to worry anymore as &pictures – Naye India Ka Blockbuster has your weekend plans covered with blockbuster movies to devour. This July, every weekend is going to be a fun-filmy affair for the viewers as the channel raises the entertainment quotient with a power-packed movie line up.

From a heart-warming story of Amrita's battle for self-respect to some kickass action by Charlie's Angels to an intriguing journey of a gangster turned politician, &pictures will keep you hooked and leave you asking for more.

So, this July be ready for an exhilarating ride filled with action, entertainment, drama and non-stop thrill with the following movie premieres on &pictures every weekend.

Bold, Fearless and energetic, the next generation of fearless angels are all set to take flight with the Hindi Television Premiere of Charlie's Angels. Directed and written by Elizabeth Banks, the action-adventure adds a new flair to the popular franchise with an intriguing storyline and phenomenal performances. The 2019 spy thriller brings together an all-new and exciting star cast starring Kristen Stewart, Naomi Scott and Ella Balinska as Charlie's fearless agents who put their lives on the line as they are set to save the deadly weapon, Callisto, going in the wrong hands.

Taking you on an unforgettable journey into the Mumbai underworld is the World Television Premiere of Indian political drama 'Daddy' on 18th July.

Directed by Ashim Ahluwalia, the film is a biopic on one of Mumbai's underworld dons, Arjun Gawli. Portraying the role of the gangster turned politician is the actor Arjun Rampal. Along with him, the movie also features Farhan Akhtar, Nishikant Kamat, Rajesh Shringarpure and Aishwarya Rajeshh in pivotal roles. The critically acclaimed movie is bound to fuel one's imagination as it follows the intertwined fates of Gawli who lands up in politics and his transition to becoming 'Daddy' (a messiah) for his followers, making it an interesting watch.

Directed by one of the most acclaimed filmmakers, Anubhav Sinha, the film narrates the story of Amrita whose seemingly perfect life is shattered when her husband slaps her at a party. T

his one incident hits her hard making her realize all the things she has left behind for her herself while trying to keep her family happy. And, from there on she embarks on a journey to reclaim her self-respect. This incredible film stars a talented cast comprising of Taapsee Pannu, Dia Mirza, Kumud Mishra, Ratna Pathak Shah, Pavail Gulati and Tanvi Azmi amongst others. Witness the most significant movie of the year on 25th July at 8 pm.

The power-packed duo - 'Bad Boys' Mike and Marcus are back again with double the thrill and comedy in the action loaded film 'Bad Boys for Life'. Directed by Adil El Arbi and Bilall Fallah, the third instalment of the franchise brings back a star-studded ensemble cast comprising the two-time Academy Award nominee Will Smith and Martin Lawrence along with Vanessa Hudgens and Joe Pantoliano amongst others. The film revolves around the Miami detectives Mike and Marcus who team up for one last ride as they go up against the vicious leader of a Miami drug cartel. Catch them in action on Sunday, 26th July at 8 pm.

Be ready with your popcorn buckets as it is going to be a filmy party every weekend with &pictures this July!