It showcases the power and strength that an Ardhangini has for her husband, and how she shields him from all evil even after her death. 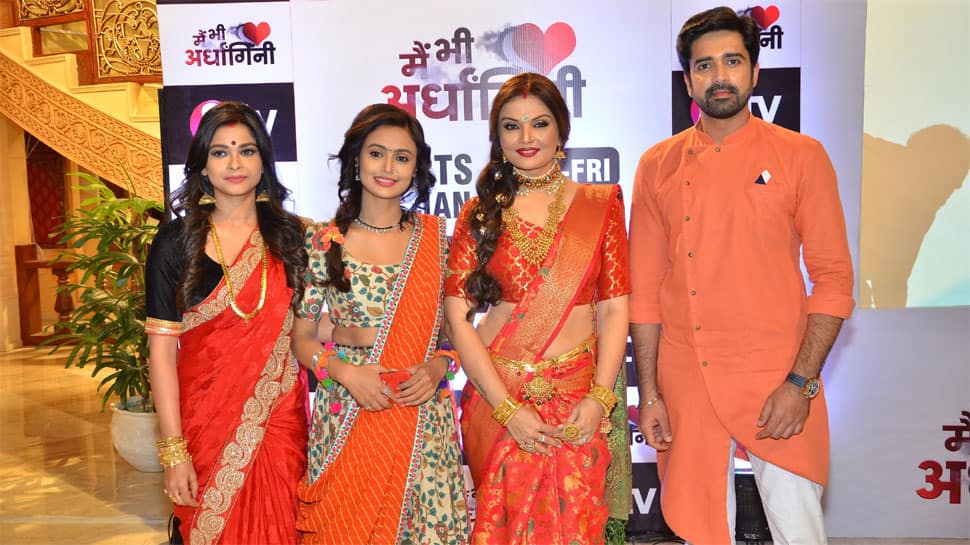 It is often said that a man's life can never be complete without a wife i.e. his 'Ardhangini' or his better half. Donning multiple roles, she is a friend, a confidant, and a person who constantly encourages her husband to be the best version of himself. She plays the protector and nurturer to not just him, but to his family as well, besides being the epitome of eternal selflessness and love.

Bringing forth an exceptional story of such a loyal bond and the strength of love is &TV's brand-new fiction offering, Main Bhi Ardhangini which will premiere 21st January 2019 every Monday to Friday at 9:30 pm. Produced by Essel Vision Productions, Main Bhi Ardhangini is a romantic drama of true love that lives beyond eternity and transcends even death.

It showcases the power and strength that an Ardhangini has for her husband, and how she shields him from all evil even after her death. The show brings together an ensemble cast with popular television faces like Avinash Sachdev, Aditi Rawat, Anjali Priya and Deepshikha Nagpal amongst others. To promote the show the star cast were in Jaipur and urged their fans and the channel's fierce loyalists to subscribe to &TV and the Zee bouquet as per the new government rule starting February 1, 2019 so they can continue to enjoy the show in the new year.

Main Bhi Ardhangini is the journey of Chitra and Vaidehi as they both are singularly dedicated to protecting Madhav - the man they love. The story delves into the life of Madhav (Avinash Sachdev) and his childhood friend Vaidehi (Aditi Rawat). Her main motive is to bring back cheer, happiness and love in Madhav's life after his wife Chitra's (Anjali Priya) tragic death. Furthermore, depicting an invaluable bond of friendship and love, Main Bhi Ardhangini will give a true glimpse of the selfless effort and unconditional love that Vaidehi (Aditi Rawat) showers on Madhav.

The show will also bring out the eternal side of love and how the spirit of Madhav's first wife, Chitra will do everything to keep them together and shield them against any source of evil even after death.

Speaking about the concept of the show, Vishnu Shankar, Head, &TV said, "We are excited to kickstart the year with the launch of Main Bhi Ardhangini, an adaptation of the very popular Zee Tamil show Yaaradi Nee Mohini which has been successfully retold in many other languages. This romantic drama at primetime weekday explores a different perspective of love, commitment and true bond that a wife as an Ardhangini has for her husband. The saga, a complete package of emotions, brings alive on screen a warm narrative and relatable characters each trying to deal with life, loss and love."

Talking about the show and its concept Shariq Patel, CEO, Essel Vision Productions said, "Romance as a genre is an all-time favourite with viewers. With Main Bhi Ardhangini we wish to portray the emotion of love and bond of a husband and wife in a different way, encompassing virtues like selflessness, devotion, loyalty, protection and care. With our unique style of storytelling, we are sure the essence of the subject will come through effectively and the audience will be intrigued to watch how both Vaidehi and Chitra, shield Madhav from evil. The story brings forward a unique relationship that is interwoven in a thread of love which surpasses even death."

Talking about his character Madhav, actor Avinash Sachdev said, "My character Madhav is an extremely righteous man who doesn't carry any sort of malice in his heart. Shy and reserved, he is respectful of his elders, especially his mother Nilambari, even though she is his step mother. Madhav is torn between the memories of his dead wife Chitra and the unconditional love received from his childhood friend Vaidehi. Main Bhi Ardhangini is a beautifully written romantic tale and it gives me immense pleasure to be a part of this story."

He further added, "I also want to take this opportunity to sincerely appeal to and urge all &TV loyalists, viewers and fans to subscribe to the Zee bouquet of channels starting February 1 as per the new subscription scheme. After all, Zee is the No. 1 network for family entertainment, like a one-stop-shop with programmes of interest to every member of the family. So, to continue enjoying our show on &TV, please buy the Zee Family Pack - Hindi SD/HD today by choosing the ZEE HSM Bouquet."

Playing the role of Madhav's childhood friend Vaidehi, Aditi Rawat said, "Vaidehi is a young and naïve girl; yet an extremely grounded soul who believes that every person is good at heart. She is full of life and is adored by everyone. Her selfless love for Madhav and her dedicated efforts as his friend to bring back joy in his life again is inspiring and rare. She will play a pivotal part in his life and I am excited to essay this role. I am also doubly excited to shoot this show as we will be in Jaipur throughout. The colourful backdrop and vibrant culture of the city lends itself beautifully to the show and it will be a visual treat for viewers. So, to keep watching &TV and its shows, do choose the attractively priced ZEE Family Pack and stay entertained!"

ZEE5 transcends borders to 'Share The Love' with Pakistan and Bangladesh