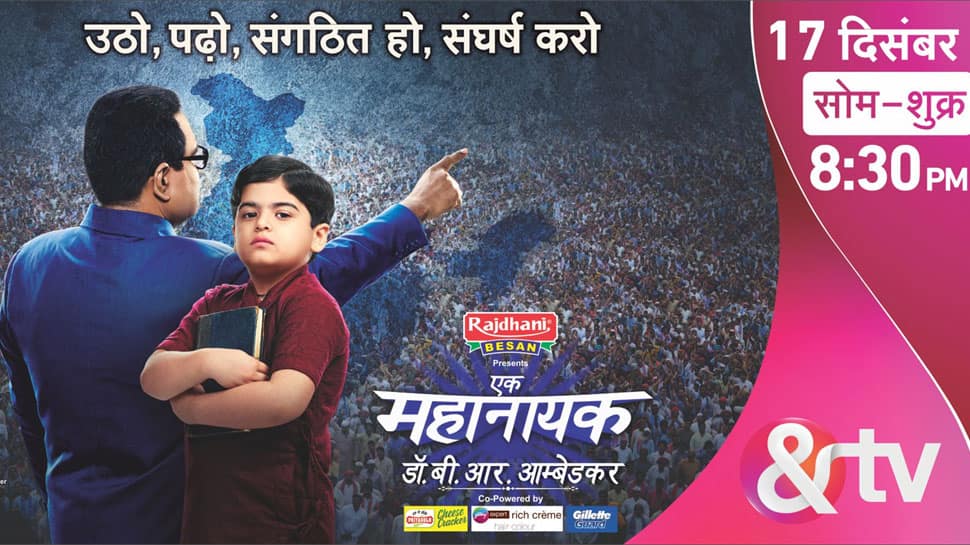 Over the course of its magnificent history, India has been led by some of the most notable leaders who have set a precedent for the future and served as an inspiration for all. One such leader in Indian history, who rallied a revolution and became a voice to reckon with, is Ek Mahanayak - Dr B.R. Ambedkar.  The founding father of the Indian constitution. A man who has etched a prominent place in millions of Indian hearts. A leader par excellence whose legacy is unparalleled.

&TV is proud to present a never-told-before life story in the Hindi GEC space of this extraordinary personality, his crusading spirit and how he became the precursor of united India, with its powerful socio-drama titled Ek Mahanayak – Dr. B.R. Ambedkar.

Produced by Smruti Shinde's SOBO Films, the show is an inspirational story of Babasaheb and his journey from the tender age of five, to him becoming the prime architect of the Indian constitution. The show Ek Mahanayak – Dr. B.R. Ambedkar will feature Prasad Jawade essaying the lead character of Dr B.R Ambedkar, Aayudh Bhanushali as young Ambedkar, together with Jaggu Niwangune portraying the role of Ambedkar's father, Neha Joshi as the Mother, Saud Mansuri as his elder brother, Athar Khan as his younger brother, Tulsa and Vanshika Yadav as his sisters amongst others.

Talking about this new offering, Vishnu Shankar, Business Head, &TV said, “Dr B.R. Ambedakar laid the foundation of a unified India by bringing millions of Indians under the ambit of one nation and one constitution. His teachings and philosophy still resonate with the Indians across the country, even today. His ability to challenge and mobilize a revolution that redefined the democracy for the Indian soil made him the greatest leader of our times. We are proud to present a show on Dr B.R. Ambedkar, which is, in fact, a first for the Hindi GEC space. I'm sure his story will inspire and touch the hearts of Indians far and wide.”

Adding further, Smruti Sushilkumar Shinde, Director, SOBO Films said “Dr B.R. Ambedkar, the architect of the Indian constitution popularly known as 'Babasaheb' was a great social reformer, educationist and politician. The life of Dr B.R. Ambedkar is an inspiring story of struggle from his birth till his last breath. We are confident that our show 'Ek Mahanayak – Dr. B. R. Ambedkar' will be a landmark life story on what a man can achieve through his clear and evolved vision, indomitable perseverance, and determination. I do believe this television show will have an incredible connection with the audiences. Never before has a story of such a great real struggle been showcased on Indian television and it's a great honour and a huge responsibility for my production house SOBO Films to present it along with &TV in front of a very eager audience.”

Aayudh Bhanushali, who is portraying the role of young Ambedkar said, “We have been studying Dr B.R. Ambedkar's work and accomplishments in the History lessons at school. But little did I know that one day I will be privileged to essay the role of young Ambedkar on screen. Through this show, I am getting to learn and discover a lot more about him, which I wouldn't have through the textbooks. It is a great learning experience personally and I am looking forward to it with great enthusiasm.”

Actress Neha Joshi who is making her debut with this show said, “This isn't just my debut on Hindi Television but also my debut in the role of a mother. And I couldn't be more honoured to get an opportunity to play the role of a mother of a great man who fought all his life to remove discrimination, degradation, and deprivation from society, and went on to become the founding father of the Indian constitution. Bheema Bai (Ambedkar's mother) was a humble woman who sincerely supported her husband and encouraged her children to do better. She wished to give them a better life and worked hard for their well-being.”

Adding further, the actress said, “I urge my fans and viewers to please tune in to Ek Mahanayak – Dr B R Ambedkar by subscribing to the Zee bouquet of channels as per the new TRAI mandate. After all, Zee is the No. 1 network for family entertainment, a one-stop-shop with programmes of interest for every member of the family. So, to continue enjoying our show on &TV, please buy the Zee Family Pack - Hindi SD/HD today by choosing the ZEE HSM Bouquet.”

Speaking about his character and debut on Hindi Television actor Jagannath Nivangune said, “It is undoubtedly a very proud moment for me to be chosen to portray the role of Raamji, Ambedkar's father. Bhim Rao's eagerness to learn and his values were imbibed in him by his father. Although Raamji was a strict disciplinarian, he always worked towards the welfare of his children and wife. The shooting for the show has been underway in full swing and I am eagerly waiting for it to go on air.”