After trading breaks of serve, the match was paused at 4-4 in the first set for a few minutes as the roof was closed to protect the players from the 38 degree Celsius (100F) heat. 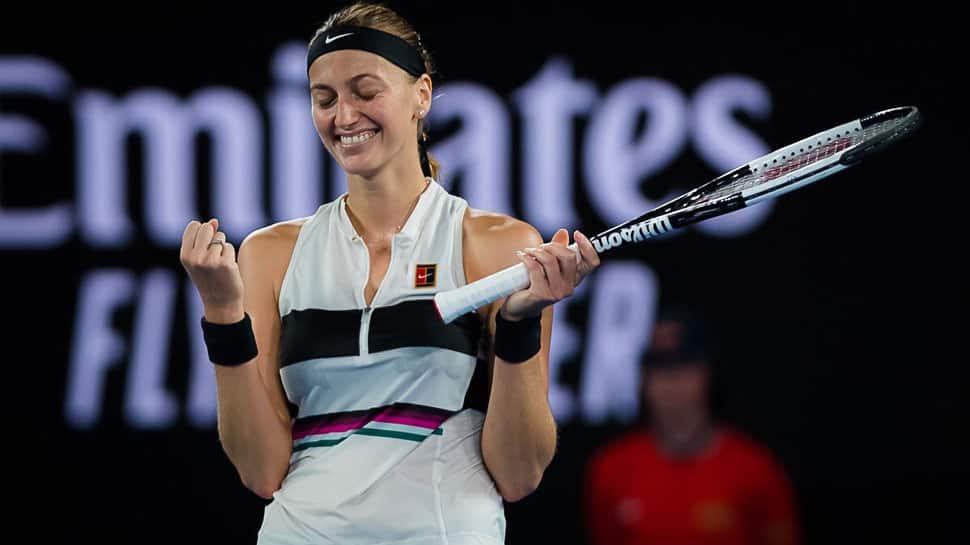 Petra Kvitova stands on the verge of completing one of the bravest comebacks in tennis after ending the fairytale run of unseeded American Danielle Collins to reach her first Australian Open final on Thursday.

Two years after missing the tournament while recovering from an attack by a knife-wielding home intruder, the eighth seeded Czech booked her first Grand Slam final since her 2014 Wimbledon triumph with a decisive 7-6(2) 6-0 victory at a scorching Melbourne Park.

"To be honest, I`m still not really believing that I`m in the final," Kvitova told reporters, after becoming the first Czech finalist in Melbourne since Jana Novotna in 1991.

"It`s kind of weird, as well, that I didn`t know even if I was going to play tennis again.

"I think not very many people believed that I can do that again, to stand on the court and play tennis and kind of play on this level."

The 28-year-old lefthander will meet Japan`s U.S. Open champion Naomi Osaka, who held off seventh seeded Czech Karolina Pliskova in the other semi-final, in the title-decider.

The tall Czech has not lost a set at Melbourne Park and will enter her first hard-court Grand Slam final on an 11-match winning streak, playing with the confidence and freedom that won her two Wimbledon titles.

Against the feisty Collins, who stunned world number two and former champion Angelique Kerber during her magical run, Kvitova survived a testing first set in stifling heat before clinically dismantling the American.

After trading breaks of serve, the match was paused at 4-4 in the first set for a few minutes as the roof was closed to protect the players from the 38 degree Celsius (100F) heat.

After resumption, they slogged their way into the tiebreak where Kvitova quickly took command.

She fired a blazing backhand winner to cap a 16-shot rally and roared to a 5-1 lead before setting up four set points with an ace and converting the first with a serve-volley.

Florida-born Collins was left cold by the decision to close the roof, which is mandatory under the tournament`s new extreme heat policy when the conditions reach a high threshold.

"They need to start the match the way it`s going to finish, I think. I think they do that in football, and I think it certainly changed a little bit of the rhythm in the match," she said.

The first game of the second set was laden with drama, as world number 35 Collins carped with chair umpire Carlos Ramos over a malfunctioning net cord sensor while on serve.

Already irked by a line call that went against her, the 25-year-old was further distracted when the sensor beeped in error twice on serve.

She was made to replay the point, and after re-starting with a second serve, she gave up a backhand unforced error to concede two break points.

She saved one with a big backhand winner but netted a forehand on the second and from there things unravelled quickly.

Swinging her forehand as if felling trees with an axe, the Czech ramped up her power game to roar to 5-0.

The day after Serena Williams gave up a 5-1 lead in the third set of her quarter-final to be overhauled by Pliskova, Kvitova was in no mood to wobble, even after allowing the American to crawl back to 30-30 when serving for the match.

The shell-shocked Collins miscued a forehand to give up match point, allowing Kvitova to fire her 30th winner for victory and the chance to crown her courageous comeback in Saturday`s final.