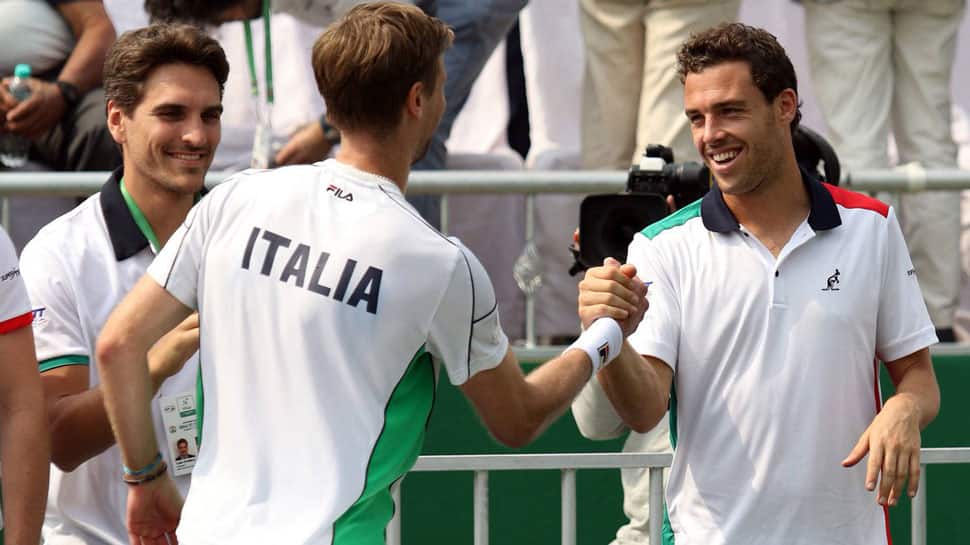 Playing on a grass court did not work out for hosts India on the opening day of the Davis Cup Qualifier at the Calcutta South Club in Kolkata, with Italy winning both the singles matches on Friday.

Experienced Andreas Seppi defeated Ramkumar Ramanathan in straight sets in the opening match, giving Italy a 1-0 lead. The world number 37 beat Ramanathan 6-4, 6-2 to register a win in just one hour and 11 minutes.

Matteo Berrettini made his Davis Cup debut on a winning note, cruising past India’s number one Prajnesh Gunneswaran in straight sets.

Italy opted to go with Berrettini ahead of top ranked and world number 19 Marco Cecchinato. The youngster did not disappoint, beating Prajnesh 6-4, 6-3.

After winning the debut match in the Davis Cup, Matteo Berrettini said, “I was dreaming about this as a child. I was really happy and focused on the match. I’m really enjoying the moment and I’m glad it went my way.”

After the opening day, Indian’s non-playing captain Mahesh Bhupathi said, “Focus is on tomorrow. We know we have a job at hand. It will be a lot harder. No time to give up now.”

Bhupathi also drew inspiration from the China tie last year. India had bounced back from a similar situation to win 3-2 in China in the Asia/Oceania Group I match last year.

Currently 0-2 down, India’s doubles pairing of Rohan Bopanna and Divij Sharan finds itself in a must-win game on Saturday. For Italy, top-ranked singles player Marco Cecchinato was paired with Simone Bolelli in the doubles category.