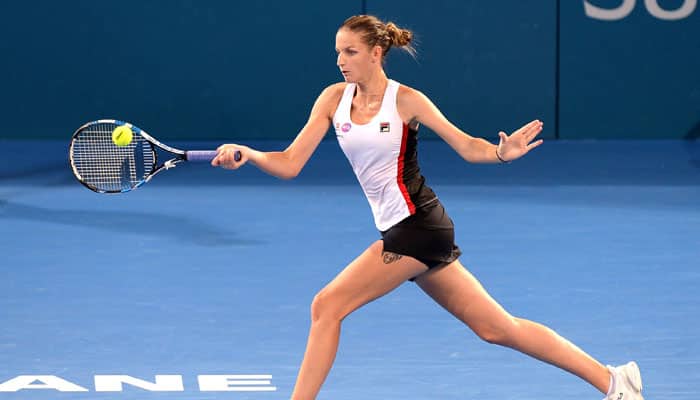 Top seed Karolina Pliskova started Friday in the last-16 at the inaugural Zhengzhou Open and ended the day in the semi-finals after defeating Polona Hercog and Sofia Kenin in succession.

Pliskova`s match against Slovenian Hercog was suspended on Wednesday due to rain with the score at 6-3, 2-5 and she only returned to court two days later after rain washed out Thursday`s matches.

The Czech claimed five games in a row to see off Hercog 6-3, 7-5 and carried that form into her quarter-final clash with sixth-seeded American Kenin, winning 6-4, 4-6,6-1.

"To play two matches in a day, it`s never easy," Pliskova said. "But in the first one, I was lucky enough to not go to a third set, just finished quickly and saved some power for the next one.

"I think I played good tennis in both matches. I was serving well today -- a lot of aces, which always helps. There`s a lot of positive things for tomorrow."

Pliskova had one ace against Slovenian Hercog but fired 18 past Kenin, winning 80% of her first serve points.

"On hard courts, she`s always tough to beat," added Pliskova. "She also played a couple of matches here and was fresh today because she didn`t have to play a match...

"She`s always fighting and I had to play really until the last moment, so it paid off."

The upset of the day saw France`s unseeded Kristina Mladenovic beat second seed Elina Svitolina 6-4, 4-6, 6-3 in the final match of the day that lasted two hours and 45 minutes.

Svitolina, who recently moved up to third in the rankings, was broken eight times and let down by an inconsistent second serve, winning only 39% of her those points.