Bopanna and Cuevas were down 7-9 in the deciding super tie-breaker but saved both the match points to win the title. 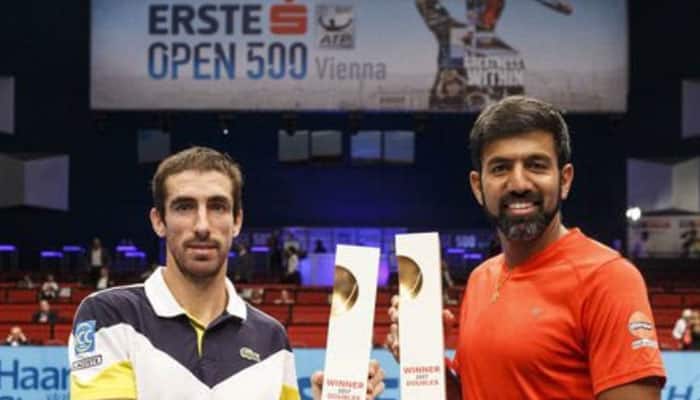 Vienna: In a memorable day for Indian tennis, Rohan Bopanna won the Erste Open title in Vienna with Pablo Cuevas while the team of Saketh Myneni and Vijay Sundar Prashanth clinched the Vietnam Open trophy at the Ho Chi Minh City.

However, Divij Sharan and his partner Scott Clayton ended runners-up at the Brest Challenger event in France, preventing what could have been an incredible as well as a unique culmination to the week for the Indian players on the circuit.

Bopanna and Cuevas were down 7-9 in the deciding super tie-breaker but saved both the match points to win the title.

It was the third title of the season for Bopanna, having won Chennai Open (with Jeevan Nedunchezhiyan) and Monte Carlo Masters (with Cuevas).

In Vietnam, the unseeded Indian pair of Myneni and Vijay Prashanth quelled the challenge of the Japanese combination of Go Soeda and Ben Mclachlan 7-6(3) 7-6(5) in the summit clash of the USD 50,000 event.

It was the first title of the season for Myneni and maiden Challenger level trophy for Prashanth.

"It was a great week. We combined well and enjoyed ourselves. I still feel I have something left in singles but definitely I will focus on doubles too," Prashanth told PTI.

Myneni, who has missed most part of the season due to injuries and has slipped to 724 in singles, was also asked if he would shift focus on doubles but he responded with a cryptic reply.

"Still the same plan as before, nothing has changed with me," he said, indicating that he still have singles in mind.

Divij Sharan and his British partner Scott Clayton ended runners-up at the Brest Challenger following a 4-6 5-7 defeat against Sander Arends and Antonio Sancic.

After losing the opening set, Sharan and Clayton led the second set 5-3 but lost four games in a row to lose the title clash.

It was second consecutive final for Sharan, having won the European Open (ATP 250 event) with Scott Lipsky last week in Antwerp, Belgium.