Tokyo Olympics: Sumit Nagal bows out after loss to world No. 2 Daniil Medvedev

The Australian Open runner-up Daniil Medvedev easily controlled the game even as Sumit Nagal tried hard. Nagal had earned his moment under spotlight when he took a set off Swiss great Roger Federer at the 2019 US Open on his Grand Slam debut. 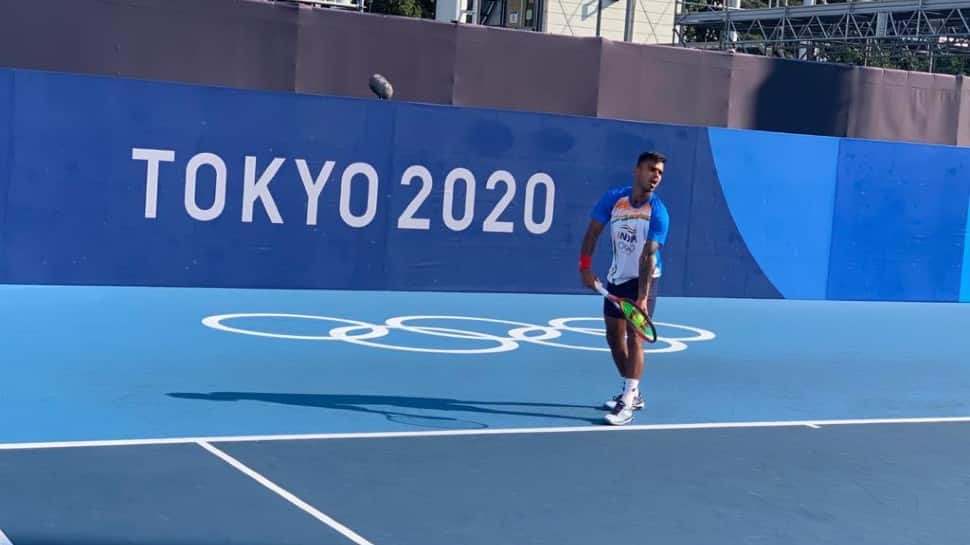 India's Sumit Nagal serves to world No. 2 Daniil Medvedev of Russia at the Tokyo Olympics. (Source: Twitter)
Share:
Edited By:

India’s Sumit Nagal was blown away by world number two Daniil Medvedev’s thunderous strokes and serves in the men’s singles second round as India’s tennis challenge all but ended at the Tokyo Games, on Monday (July 26). The Russian did not even need his ‘A’ game as he cruised to a 6-2, 6-1 win in just 66 minutes against 160th ranked Nagal at court 1 of the Ariake Tennis Centre. The gap between a world class Medvedev and Nagal, who is still struggling to play the ATP Tour events regularly, was pretty clear.

The Australian Open runner-up easily controlled the game even as Nagal tried hard. Nagal had earned his moment under spotlight when he took a set off Swiss great Roger Federer at the 2019 US Open on his Grand Slam debut.

Nagal began by dropping his serve in the very first game of the match when he netted a backhand and match ended when his forehand sailed over the baseline on match point while serving to stay in the contest. Medvedev’s powerful strokes from the baseline overwhelmed Nagal, whose game was not enough to trouble a much superior opponent.

The Indian managed to hit a few winners but they were very few. The match ended when Nagal dropped his serve in the seventh by hitting a forehand long.

Nagal had won his first round against Uzbekistan Denis Istomin for India’s first men’s singles win at Olympics in 25 years. Sania Mirza and Ankita Raina were knocked out of the women's doubles first round after dominating the contest on Sunday.

It is highly unlikely that India will be able to field a team in mixed event, the entries for which will be announced on Tuesday.

The cut is likely to be around 50 and combined ranking of the Indian players Nagal (144) and Mirza (9) is 153. India could not field a men’s doubles team due to Rohan Bopanna and Divij Sharan’s low combined rank of 113.