Williams and Ostapenko had both lost their opening ties on Sunday so were desperate for a victory to keep their future fate in the eight-woman event in their own hands. 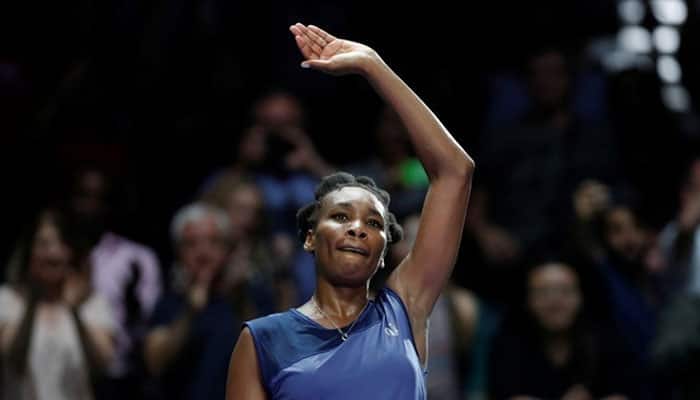 Singapore: Venus Williams produced a vintage display full of guts and determination to grind out a 7-5 6-7(3) 7-5 victory over Jelena Ostapenko at the WTA Finals on Tuesday to set up a White Group decider for a semi-finals berth against Garbine Muguruza.

Williams and Ostapenko had both lost their opening ties on Sunday so were desperate for a victory to keep their future fate in the eight-woman event in their own hands and neither appeared willing to budge in a titanic three hour and 13-minute slugfest.

In the end, the 37-year-old Williams emerged from a bruising encounter that featured 20 breaks of serve with a triumph built on her calmness at the key moments and ruthlessness when offered a chance to attack her opponent`s weak second serve.

"Sometimes you need some luck. I don't know if I had any tonight as I had to work for every point," Williams said in a courtside interview.

"It's not easy when you lose the first match. Both of us were in the same situation and you have to fight, what else can you do, to live another day."

If the first encounter of the day was a marathon, the second was a sprint as Czech third seed Karolina Pliskova swatted aside Spaniard Muguruza 6-2 6-2 in just 62 minutes to advance to the last four as pool winner with two victories from as many ties.

The opening match started with Ostapenko trying to force the pace with the high-risk strategy that carried her to French Open glory, while Williams was content to pick up free points as her opponent sprayed a plethora of attempted winners wide or long.

The Latvian edged ahead in the opener, however, and even served for the set at 5-3 but the veteran American dug deep and reeled off six consecutive games to steal the first set and then move ahead in the second.

The 20-year-old battled back as the pair traded two breaks apiece before Williams brought up a her first match point in the 10th game that she failed to convert when she dumped a forehand into the net as Ostapenko continued to go for her shots.

The pair's inability to hold serve spilled over into the tiebreak and Williams handed Ostapenko three set points with a wild forehand and the Latvian levelled the contest on the first of them when the American netted a backhand.

Four more breaks of serve followed in the decider until Ostapenko rallied from 0-40 to hold in the ninth game and the Latvian saved three more break points in the 11th before finally running out of lives when she sent a backhand wide.

Williams could smell blood and a booming ace brought up three more match points and the American sealed victory on the second of them with a crosscourt backhand winner.

Pliskova was impressive in her straight sets win over Williams to open the tournament and she was equally imperious against Wimbledon champion Muguruza as she broke twice to race though the first set in just 26 minutes.

Muguruza has often struggled against the Czech, trailing 6-2 in head-to-head meetings ahead of their match, and despite offering some resistance when she saved three match points at 5-0 down in the second set, the Spaniard had little answer to Pliskova`s power.

"I don't think either of us played that well today as we had to wait so long to get on the court but I am happy that I am through," Pliskova said. "I was expecting a tough one so it was good that it was actually easy today."

Williams (1-1) and Muguruza (1-1) will meet on Thursday to decide who advances along with Pliskova (2-0), while Ostapenko's (0-2) tournament debut is already over and she will have only pride to play for when she faces the Czech on the same day.