Akhilesh Yadav, Mayawati feel CBI heat ahead of UP bypolls

The CBI is tightening its noose on two scams -- the sale of 21 state-owned sugar mills as well as the memorial scam of the Mayawati regime and the multi crore mining scam in which mining leases were sanctioned when Akhilesh Yadav held the mining portfolio. 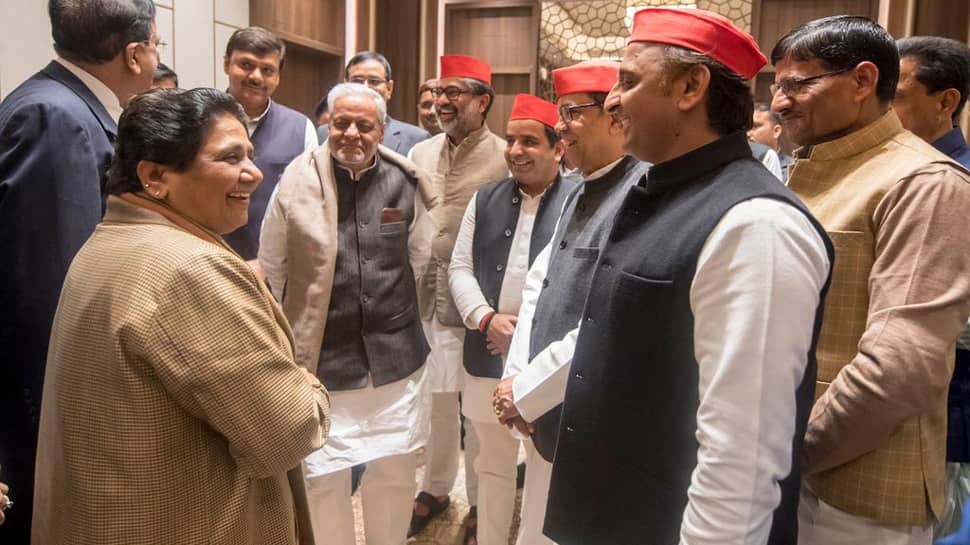 Lucknow: Bahujan Samaj Party President Mayawati and Samajwadi Party chief Akhilesh Yadav`s resolve to regain a foothold in state politics by winning a sizeable number of seats in the upcoming by-elections to 12 Assembly seats in Uttar Pradesh may not actually work according to plans.

Both the leaders are presently facing the heat in CBI inquires and are likely to spend more time in dealing with questions from the investigating agencies than in campaigning for their respective parties.

The CBI is tightening its noose on two scams -- the sale of 21 state-owned sugar mills as well as the memorial scam of the Mayawati regime and the multi crore mining scam in which mining leases were sanctioned when Akhilesh Yadav held the mining portfolio. The mining portfolio was later passed on to Gayatri Prajapati.

CBI sources claim that in all the cases, summons will soon be issued to both the leaders for questioning.

Raids have already been conducted on six bureaucrats who were instrumental in handing out the mining leases. The raid of IAS officer Abhay Kumar Singh threw up Rs 49 lakh in cash alone, apart from other valuables.

According to sources, before Prajapati was appointed minister for mining, it was then Chief Minister Akhilesh Yadav, who held the portfolio from March 2012 to July 2013 and cleared files related to lease of mines.

The CBI is auditing these files to find any violation of rules. A team of the Enforcement Directorate questioned Prajapati for six hours on Tuesday. His sons have also been questioned in the matter.

In Gayatri Prajapati`s case, the CBI has found that e-tendering norms were violated and the then Mining Secretary and the then District Magistrates of Fatehpur, Banda, Deoria, Prayagraj, Kaushambhi, Ghazipur and a dozen other districts, had signed on the files.

Akhilesh Yadav, as chief minister, ignored the scam in the department which apparently runs into several hundred crores.

Virtually abandoned by the Samajwadi Party since his arrest in March 2017 in a rape case, sources close to Prajapati indicate that he might soon turn approver which could add to the problems of Akhilesh Yadav.

In the case of Mayawati, the CBI is getting dangerously close to interrogating her.

Retired IAS Netram, who served as a senior officer in her secretariat and played a key role in the sale of sugar mills that caused a loss of Rs 1,170 crore to the state exchequer, has already been raided and questioned by the CBI twice. The Enforcement Directorate has also joined in the probe.

In the memorial scam, the CBI has shortlisted 39 officials, who are responsible for inflating the costs of constructions. These include retired IAS officer Ram Bodh Arya, former CMD of Uttar Pradesh Rajkiya Nirman Nigham C.P. Singh, and several engineers and technocrats.

The earlier inquiry into the memorial scam in Lucknow and Noida, conducted by the Lokayukta, had found former Ministers Babu Singh Kushwaha and Naseemuddin Siddiqui also guilty of misappropriation of funds.

Siddiqui, once a close aide of Mayawati, had claimed last year that these sugar mills were sold on the instructions of Mayawati and BSP General Secretary Satish Chandra Misra.

He also denied his involvement in the memorial scam and said all work was carried out on the instructions of Mayawati.

Siddiqui was thrown out of the BSP last year and is now in the Congress. He is being counted as a key witness against Mayawati.

Meanwhile, SP and BSP leaders are questioning the timing of the momentum that the CBI probe has gathered after the Lok Sabha elections. "Why was the CBI quiet in the past one year? It is obvious that the probe is designed to prevent our leaders from working for the upcoming by-elections but we are not going to be deterred," said a BSP functionary.

Udaiveer Singh, SP leader, said, "This has been strategy of the BJP government. They always use CBI and other agencies against the opposition parties and their leaders."

Uttar Pradesh government spokesman Shrikant Sharma said: "We have zero tolerance for corruption and those who have robbed the common man`s money, will be punished."

Both Akhilesh and Mayawati, however, have maintained a studied silence on the issue. Mayawati is back in Delhi and has put preparations on hold for by-elections on the backburner.

Akhilesh, who has just returned from a foreign vacation, is also keeping a distance from the media. His interaction with party workers is also limited.

Both the leaders are, according to sources, spending more time with their respective lawyers than in political activity.