The pair apparently wanted to make a statement against the high prices of onions. Guests at the wedding also decided to present the newlyweds the highly sought commodity - baskets of onions! 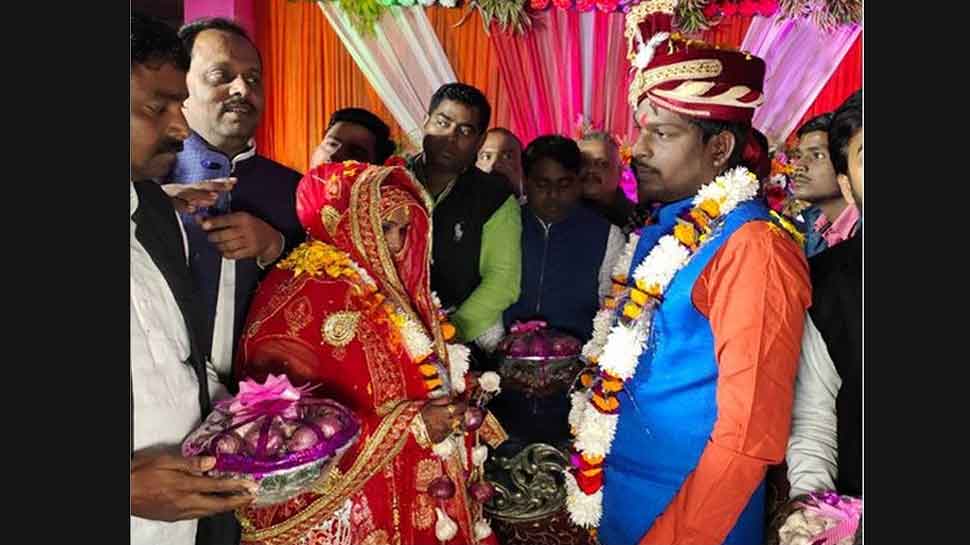 Varanasi: A couple in Varanasi on their wedding day exchanged garlands as is the norm in Indian custom but instead of flowers the garlands were fashioned out of onions and garlic.

The pair apparently wanted to make a statement against the high prices of onions. Guests at the wedding also decided to present the newlyweds the highly sought commodity - baskets of onions!

UP: Bride and groom exchange garlands of onion, garlic

Kamal Patel of the Samajwadi Party said, "Prices of onions are touching the sky from last one month so now people have started considering onion as precious as gold. In this wedding, the bride and groom used the garland of onions and garlic. The prices of onion have risen to Rs 120 per kg."

Another Samajwadi Party leader Satya Prakash said the new couple wanted to oppose the high prices of onions and so decided on this unusual method.

"The bride and groom have tried to convey a message by opposing the skyrocketing prices of onions and other food commodities. Samajwadi Party has carried out several protests against such issues. This is a historic event for the couple," he added.

According to the SP leaders, the price of onions continues to surge in markets of Varanasi.

Uttar Pradesh: Over 6,000 trees to be cut for Jewar Airport