After tightening the noose on illegal slaughterhouses, Chief Minister Yogi Adityantah on Wednesday ordered banning of pan masala, gutka in all government offices in Uttar Pradesh. 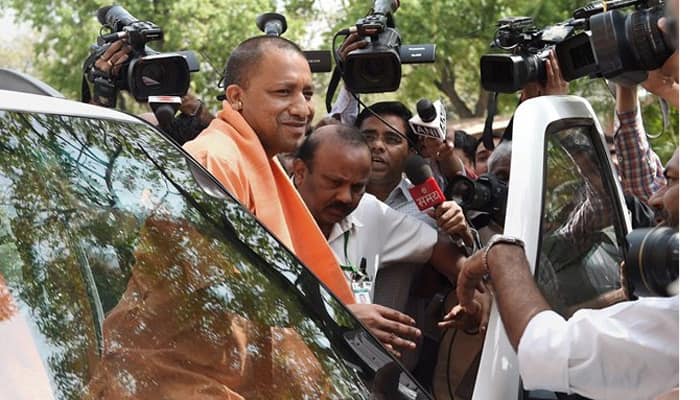 The newly-elected CM took the significant step after seeing betel-juice stained walls during his first visit to the secretariat annexe building in Lucknow.

Numerous government offices across UP bear the ugly sight of stains of `paan' and `gutka' on the walls.

"The chief minister visited all the floors of the annexe building and met officials posted there. After detecting betel stains on walls, he asked employees not to consume paan or paan masala during duty hours and ensure cleanliness," Deputy Chief Minister Keshav Prasad Maurya, who accompanied Yogi, said.

Adityanath also asked the the staff to make the atmosphere in the building healthy and clean by avoiding the use plastic, Maurya told reporters.

Chewable tobacco like 'khaini', 'gutka' and 'zarda' are some of the major causes of deaths and diseases in India and account for nearly 0.9 million deaths every year.

In keeping with the BJP's manifesto, the Uttar Pradesh Chief Minister today directed police officials to prepare an action plan for closure of slaughter houses across the state.

He also ordered a blanket ban on smuggling of cows and said zero tolerance would be exercised in this regard.

Will pass legislation if compromise is not reached: Subramanian Swamy on Ayodhya dispute