The notice was sent out in the name of BSP chief Mayawati and had the signature of party state president RS Kushwaha. 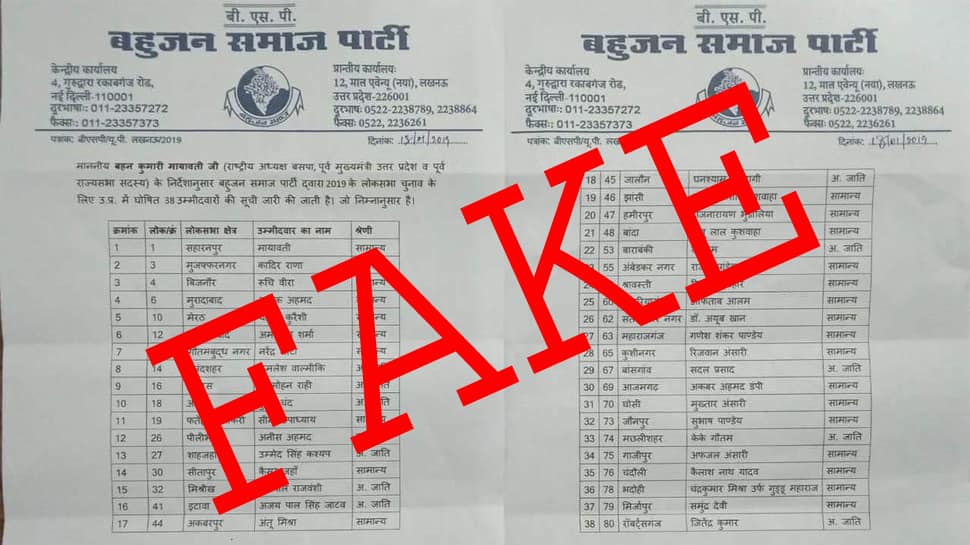 LUCKNOW: Soon after the Samajwadi Party and the Bahujan Samaj Party (BSP) announced its alliance for the Lok Sabha elections, a list of BSP candidates was shared on social media. The list went soon went viral forcing the BSP to issue a clarification that it was actually fake and not a list released by the party.

The fake list had names of BSP leaders on 38 seats. The notice, which later turned out to be fake, was sent out in the name of BSP chief Mayawati and had the signature of party state president RS Kushwaha. Printed on a BSP letter pad, and dated 13 January 2019, the list looked as real as possible.

To contain the fuelling rumour, Kushwaha issued a clarification and blamed the opposition parties for giving rise to such fake stories. He claimed that opposition is feeling the heat due to the SP-BSP alliance hence circulating such messages on social media.

The BSP filed an FIR in connection with the case at the Gautam Palli Police Station in Lucknow. The police have registered a case under Sections 419,468,469,470 and 471 of the Indian Penal Code (IPC) and have started investigating the matter.

Kushwaha said that circulating fake messages and using someone's signature is a criminal offence and warned of action against the culprits.

The SP-BSP, as per the alliance announced by Mayawati and Akhilesh Yadav, will contest the Lok Sabha polls on 38 seats each in Uttar Pradesh. Two of the 80 seats have been allotted for smaller alliance partners. Though the two parties have ditched the Congress, Akhilesh and Mayawati said that they will not field any candidate in Gandhi bastions Amethi and Raebareli.