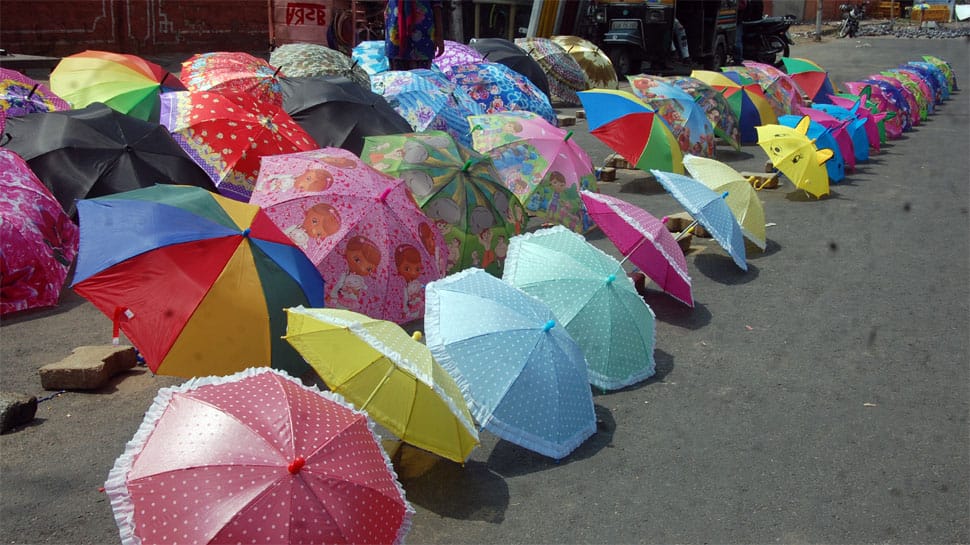 Umbrellas being sold ahead of Monsoon rain at Jawahar Lal Nehru Marg in Jaipur on Tuesday. (ANI Photo)

The heavy downpour has wreaked havoc in UP, especially the low-lying areas. At least 20 persons died and 19 others were injured due to rain-related incidents in the state. Roads in several areas were eroded due to rains. Efforts to rescue people living in low-lying areas and near river beds are underway.

UP's Balrampur district witnessed 18 hours of nonstop rain creating a flood-like situation. An ambulance drowned in rainwater. However, the mobile medical unit and others inside the vehicle were rescued on time. Rains also flooded the railway tracks in the district, disrupting train services.

In Kushinagar, a school van with children on board got stuck in the water at a city underpass. Locals and authorities rescued the children after a lot of efforts. The driver was later arrested on charges of negligence.

As rains lashed in MP's Indore, streets submerged under water and the city drainage system failed. Rain water also flooded several homes. The monsoon is expected to cover the entire state by July 3, and is likely to reach the capital city Bhopal by Thursday, India Meteorological Department's (IMD) said. Heavy rainfall is likely to occur in some parts of Ratlam, Jhabua, Alirajpur, Dhar, Barwani, Ujjain, Agar Malwa and Indore districts in next 24 hours.