Out of power in UP but 'gundagardi' continues; Samajwadi Party MLC's nephew slaps police officer on camera

A youth claiming to be nephew of Samajwadi Party MLC Ramesh Yadav was caught on camera slapping a police officer after his arrest for assaulting hospital staff in Etah. 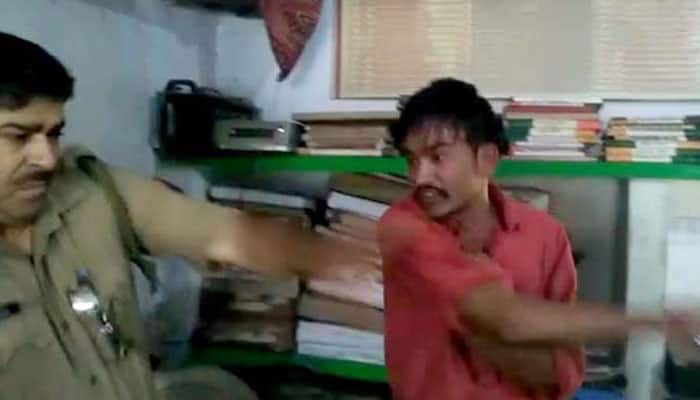 Lucknow: Though Mulayam Singh Yadav's party has been thrown out of power in Uttar Pradesh, but the arrogance of his power-drunk leaders is yet to fade in.

Throwing a big challenge to the Uttar Pradesh government led by Chief Minister Yogi Adityanath, a young man claiming to be a relative of Samajwadi Party MLC was caught on camera thrashing a police officer in the Etah district of UP on Wednesday.

According to ANI, the youth slapped the police officer shortly after he was arrested for assaulting hospital staff in Etah.

Mohit Yadav, the 24-year-old man in question, was taken to the police station after he assaulted two hospital staff for denying him a VIP treatment.

Mohit Yadav, a jobless youth, had gone to a hospital with a relative and demanded VIP treatment for an X-ray.

When he was refused, Mohit Yadav allegedly beat up a lab technician and assaulted a doctor. The hospital then called the police, which took him to the police station.

In the video, the man can be seen announcing his name before thrashing the police officer and hurling abuses to other policemen present there.

He claimed that he is the nephew of the Samajwadi Party lawmaker of the area in Etah, western Uttar Pradesh.

As police officers rushed to control him, he also grabbed the collar of one of them.

The man has now been arrested and charged with assault and obstructing an official from duty.

Mohit Yadav is the nephew of Ramesh Yadav, a member of the state’s legislative council and a senior leader of the Samajwadi Party, which was ousted by the BJP in the UP assembly elections two months ago.

While the Samajwadi Party’s five-year term under former Chief Minister Akhilesh Yadav was marked by several incidents of high handedness and lawlessness by politicians and their relatives,  police officers say they are now under strict orders from new Chief Minister Yogi Adityanath to spare no one who breaks the law.

“It seems he was under the influence of alcohol,” said Satyarth Anirudh Pankaj, a senior police officer.

#WATCH: A youth claiming to be nephew of SP MLC Ramesh Yadav slaps a policeman in Etah (UP) after his arrest for assaulting hospital staff. pic.twitter.com/apWJf2uczH

Akhilesh Yadav stirs controversy, asks if any jawan from Gujarat has martyred; Twitterati give him reply