Twelve minor school children and their bus driver were killed when their vehicle collided with a lorry amid dense fog on Aliganj-Paliyali road near Etah. 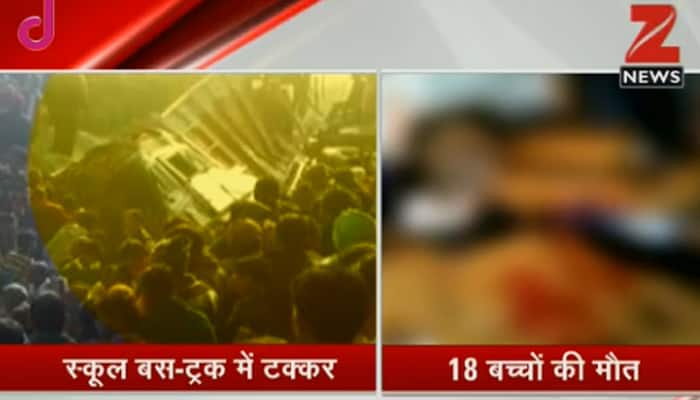 Etah: Twelve minor school children and their bus driver were killed and 35 kids injured when their vehicle collided with a lorry amid dense fog on Aliganj-Paliyali road near here early morning on Thursday.

The bus was carrying students to J S Vidyaniketan school which had opened flouting the district magistrate's orders to keep all schools up to class VIII closed till tomorrow in view of intense cold, officials said.

The mishap occurred near Asadnagar village under Aliganj Kotwali police station area in Etah, which is four hours drive from the national capital.

The deceased were in the 5-15 years age bracket.

This is the second incident in six months in the state involving school kids after a school mini-bus was hit by a train at an unmanned railway crossing in Bhadohi district which left 8 children dead and 14 others injured.

Nath said soon after getting the news, senior officials rushed to the accident spot and supervised rescue and relief operations.

A crane had to be deployed to retrieve the bus which lay mangled as a large crowd of onlookers gathered at the scene. Gas cutters were used to open up the body of the bus for rescuing the trapped children.

Nearly 20 injured students were rushed to government hospitals in Etah, Saifai and nearby Aligarh. Some were sent to local private hospitals.

Nath said orders have been issued to cancel the recognition of the school whose manager and principal defied the district administration's directives and opened the school.

FIR is being lodged against the school management.

Eyewitnesses said the truck, coming from the opposite direction at a high speed, hit the bus which overturned under the impact of the collision.

The front portion of the bus was ripped open under the impact of the collision.

Those killed have been identified as Akash (40 bus

Taking a serious note of the accident, ADG (Law and Order) Daljit Chaudhay said district officials have been asked to carry out a thorough check of vehicles ferrying children to school on certain parameters as there has been a spurt in such mishaps.

In a similar incident in Farrukhabad district, a van carrying children of VHL Public School collided with another vehicle, injuring nine children and the driver in Kampil police station area this morning.

Prime Minister Narendra Modi has condoled the death of children in the mishap.

"Anguished by the tragic accident in UP's Etah district. I share the pain of the bereaved families & condole passing away of young children," he said in a tweet.

"I pray that those injured in the accident in Etah recover at the earliest," he said.

Uttar Pradesh Governor Ram Naik and Chief Minister Akhilesh Yadav also condoled the death of the children in the mishap.

Akhilesh has asked the district officials to launch all out rescue operations and ensure proper treatment of the injured.