'Who is Sri Sri Ravi Shankar to mediate on Ayodhya? he's just avoiding probe into AOL' 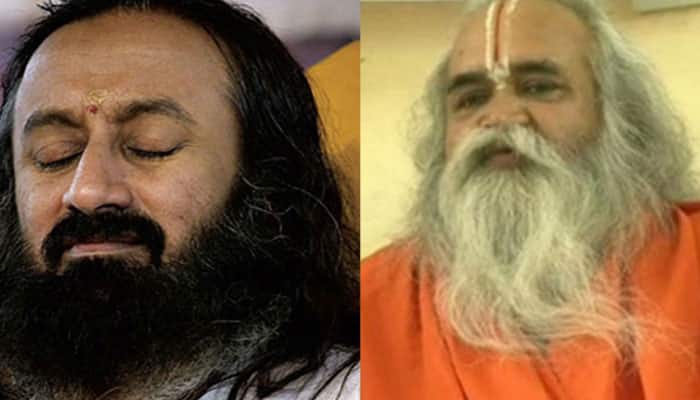 Ayodhya: Former BJP MP Ram Vilas Vedanti has once again rejected Sri Sri Ravi Shankar's offer to mediate in the Ayodhya dispute case and said that he should rather focus on running his own NGO the Art of Living (AOL).

Who is Sri Sri Ravi Shankar to mediate? He should continue to run his NGO and receive foreign funds, Ram Vilas Vedanti told ANI on Thursday.

Further attacking the AOL founder, the UP-based saint alleged that Sri Sri has amassed huge wealth from foreign funding, and by offering to mediate in the Ram Temple issue, he was just trying to save himself from a government probe.

''I believe he has amassed a lot of wealth and to avoid a probe he has jumped into the http://zeenews.india.com/india/efforts-to-resolve-dispute-welcome-but-wont-surrender-claim-on-ayodhya-muslim-personal-law-board-2057360.htmlRamTemple issue,'' Vedanti said.

"How can someone who has never been associated with the movement and never had darshan of the Ram Lalla mediate on the matter of temple construction...we have gone to jail for it, faced house arrest and have been fighting court cases ...Sri Sri does not qualify to mediate on the matter," Vedanti said.

"We want Muslim religious leaders to come forward. We will sit together and discuss the issue...We want Hindus and Muslims together to find a solution to the dispute and that temple is constructed on the basis of mutual agreement," he said.

Vedanti also said the Ram Temple movement has been led by the Ram Janmbhoomi Nyas and Vishva Hindu Parishad and these two organisations should get an opportunity to hold a dialogue on the issue.

Importantly, the All India Muslim Personal Law Board and the Babri Masjid Action Committee (BMAC) have earlier opposed an out of the court settlement of the issue.

Ravi Shankar has recently interacted with several Hindu groups on the Babri Masjib-Ram Janmabhoomi issue ahead of his visit to Ayodhya.

Following the meeting, Adityanath had said that talks were the only way out to find a solution to the dispute. “If talks fail, let court take a decision on Ayodhya,” the UP CM told Zee News.

Adityanath also said that he was ready to provide all necessary support to stakeholders involved in negotiations.

The Art of Living Foundation had last week said that Sri Sri Ravi Shankar has been in touch with several imams and swamis, including Acharya Ram Das of Nirmohi Akhara, to help find an out-of-court settlement to the Ram Temple dispute.

Denied ration over biometric, woman starves to death in UP; Akhilesh Yadav fumes