Minister of Social Justice and Empowerment Thawar Chand Gehlot also posted his photograph of himself wearing the jacket. 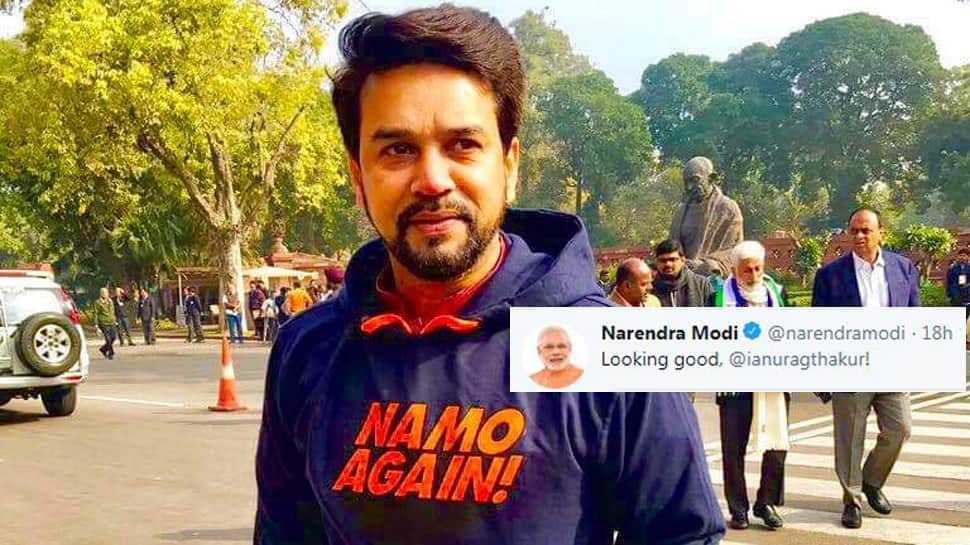 NEW DELHI: Bharatiya Janata Party (BJP) MP Anurag Thakur was on Tuesday seen wearing a jacket to Parliament which had two words written on it - Namo again! Posting his photo in the jacket on his Twitter account, the BJP MP challenged his other colleagues to wear the 'hoodie' too.

I am wearing mine _

The BJP MP's photograph got a thumbs up from the Prime Minister himself. "Looking good, @ianuragthakur!," PM Modi tweeted.

Several others also replied to Thakur's tweet with their own photos in similar jackets.

Political fashion statement by Sh. @ianuragthakur ji . __
What he is wearing is not hoodie only, it's voice of the nation #NAMOagain

Get your tshirt today at NAMO Merchandise
via NaMo App https://t.co/6P6G1rpZPa pic.twitter.com/dxfmt3fsVZ

Soon after, other BJP leaders and office bearers took to Twitter to share their photos with 'Namo' jackets, mugs and other merchandise.

Minister of Social Justice and Empowerment Thawar Chand Gehlot also posted his photograph of himself wearing the jacket with a caption: "I have worn it, what about you? Wear it with the pledge: NaMo Again! to bring Narendra Modi back as the Prime Minister in 2019. Jai Hind!" He also tagged BJP leaders Shivraj Chouhan, Rajyavardhan Singh Rathore, Kailash Vijayvargiya, Rakesh Singh, Narendra Singh Tomar, Radha Mohan Singh and Arjun Ram Meghwal in his tweet.