The newborn joins many other babies in the legislature after Mallard relaxed rules in 2017 to make parliament more child-friendly. 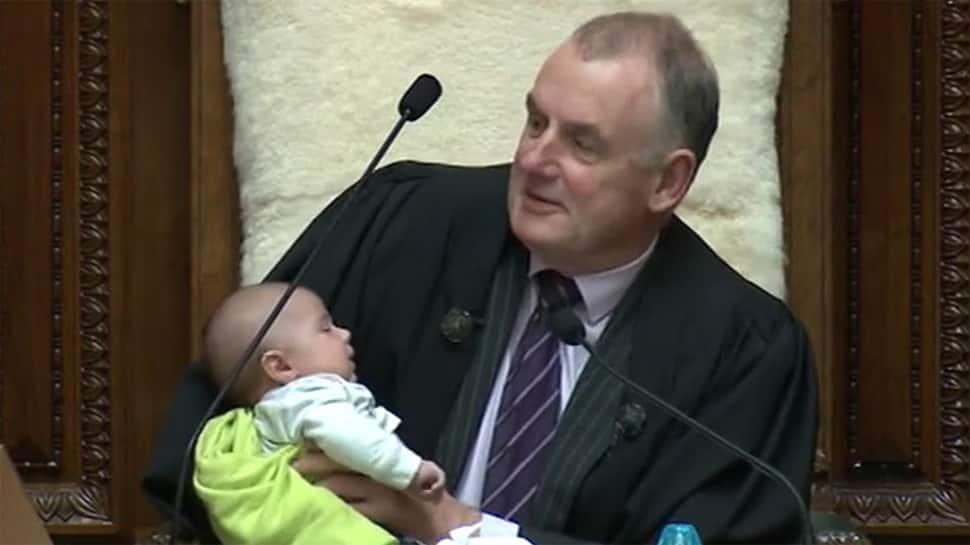 Wellington: As New Zealand lawmakers vigorously debated fuel prices in parliament this week, speaker Trevor Mallard called for order while feeding baby Tutanekai his bottle. The six-week-old son of Labour MP Tamati Coffey and his husband, born via a surrogate mother last month, was being cuddled by his father in the debating chamber on Wednesday when the speaker offered to hold him.

"There are times when I can be vaguely useful," Mallard told Reuters, adding that he tried to help care for lawmakers` babies when possible.

Normally the Speaker’s chair is only used by Presiding Officers but today a VIP took the chair with me. Congratulations @tamaticoffey and Tim on the newest member of your family. pic.twitter.com/47ViKHsKkA

The newborn joins many other babies in the legislature after Mallard relaxed rules in 2017 to make parliament more child-friendly.

About a dozen MPs have had infants in a parliamentary baby boom, and Prime Minister Jacinda Ardern last year became New Zealand`s first premier to take maternity leave and the world`s second elected leader to give birth in office.

Her daughter Neve Te Aroha made headlines in September when she accompanied Ardern to the United Nations General Assembly in New York.

But worker rights advocates told Reuters that few New Zealanders get the same rights to balance caring for their families with work, and they hope the high-profile parliamentary babies will bring a wider change in working conditions.

Tania Te Whenua, a Maori lawyer who is working on a case for New Zealand`s largest union, the Public Service Association, alleging discrimination against indigenous Maori women employees, said she had felt the hostility in previous workplaces over her young children visiting her at work."The ability to have, nurture and raise children is a celebrated aspect of Maori culture....and to be made to feel as though that is frowned upon in the workplace leaves Maori feeling like the outsider," she said.

She expressed support for the parliament speaker`s family policies. Mallard, a political veteran, and father of three adult children, with six grandchildren, hoped more employers would follow his lead.

"What I`ve found is that it adds to the positive atmosphere of the workplace," he said, adding that he regularly encountered babies in the halls of power and even the indoor parliamentary swimming pool.

Their presence provides a boost to morale, evidenced from the eagerness of official messengers to swap their usual document deliveries for the task of taking an infant into parliament instead, he said.

"When there`s a baby to be carried in....there's a fair bit of competition to do the job," said Mallard.