Thanks to the battle between PewDiePie and T-Series, YouTube is bigger than Gmail and giving a tough competition to Facebook. 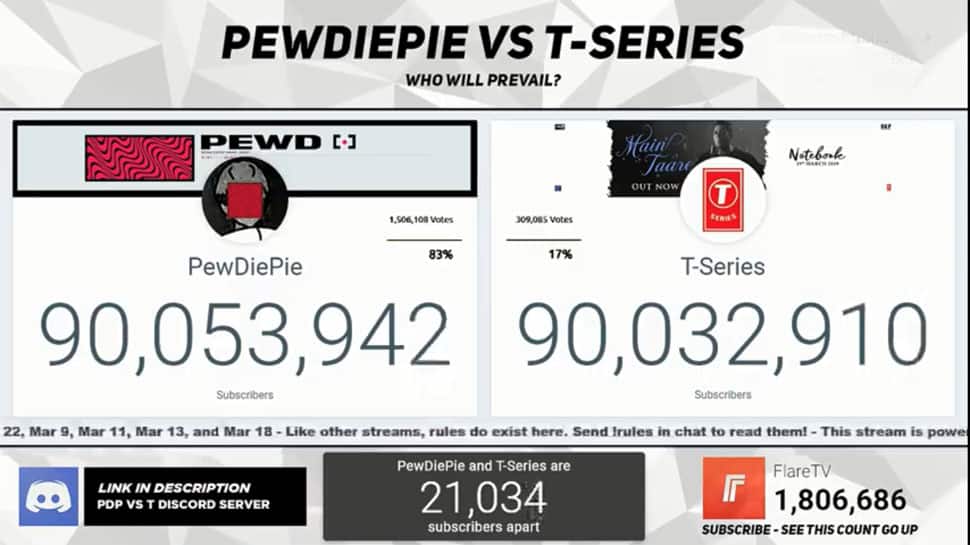 The historic feat was first achieved by the Swedish gamer Felix Kjellberg's PewDiePie, followed by the Indian production firm T-Series. The battle between the two channels for the top spot on YouTube and the ensuing campaigns to get more followers was a key factor in achieving this milestone.

“Thanks for 90 million subs, feels weird celebrating but just wanted to say thanks for all the support and love especially as of late,” tweeted PewDiePie.

Thanks for 90 million subs, feels weird celebrating but just wanted to say thanks for all the support and love especially as of late.

Even as both the channels crossed the massive milestone of 90 million subscribers, voices online speculated of when will two surpass 1 Billion subscriber count – a feat attained only by YouTube's combined official channels.

Thanks to the battle between PewDiePie and T-Series, YouTube is currently bigger than Gmail and giving a tough competition to Facebook.

The race between the two YouTube giants has been going on for months now. PewDiePie has dominated the top spot for six years and continues to do so. It faces stiff competition from Bhushan Kumar-owned record label, which overtook on three occasions for a few minutes – first time on February 22 for about eight minutes, second on March 9 for about eight minutes and then on March 13 for a brief minute.

However, the epic battle for the most subscribed channel is far from over. While analysts had predicted that T-Series will start ruling the Google-owned video platform around October 2018, PewDiePie with the help of his fans has successfully managed to keep the music and film producing giant at bay. Every time T-Series comes close, fans roll up their sleeves for new tricks – some of which include hacking worldwide printers and Chromecasts, defacing Wall Street Journal website and historic monuments and so on.

PewDiePie is 18,222 subscribers ahead of T-Series at the time of filing this story.