T-Series inches closer to PewDiePie in battle for Youtube supremacy

Few hours ago Irish gamer JackSepticEye had expressed concerned about the possibility of PewDiePie losing the battle with T-Series.

NEW DELHI: The ongoing battle between PewDiePie and Indian music brand T-Series for the YouTube crown is getting quite intense as PewDiePie, which has been most subscribed YouTube channel for the last six years, was just 27,500 subscribers ahead of T-Series at 9:30pm IST on Tuesday. 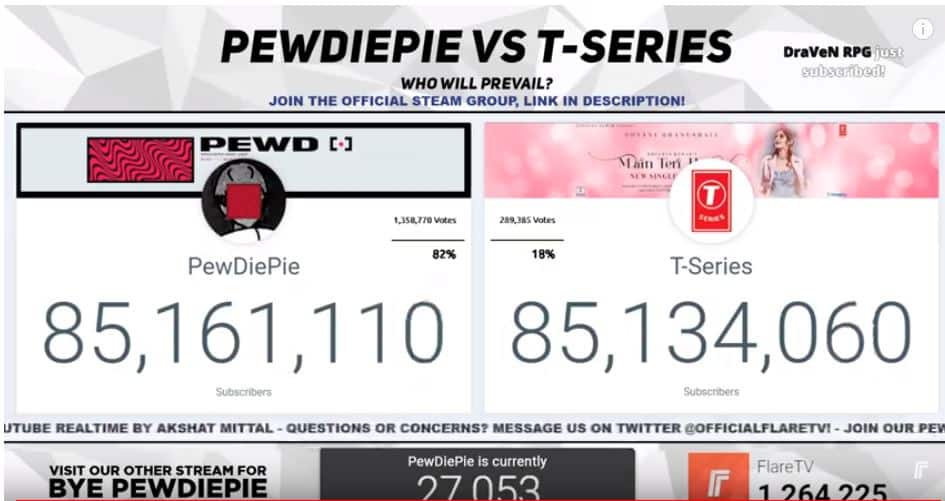 Few hours ago, Irish gamer JackSepticEye had expressed concerned about the possibility of PewDiePie losing the battle with T-Series.

JackSepticEye, who is one of the biggest supporters of PewDiePie, had urged his followers to back the Swedish YouTuber. "This is just sad.... you can end this madness by subscribing to PewDiePie! TIME IS RUNNING OUT," he tweeted with a link to Pewds’ livestream.

This is just sad.... you can end this madness by subscribing to PewDiePie! TIME IS RUNNING OUT pic.twitter.com/tH94KqImcz — Jacksepticeye (@Jack_Septic_Eye) February 10, 2019

It may be recalled that on February 10, PewDiePie, whose real name is Felix Kjellberg, had tweeted 'plan z in 10 min' showing his growing desperation to maintain his top spot. A day earlier, he had tweeted showing his confidence of being at the top and said: "no video today, just to give tseries a feeling of hope."

no video today, just to give tseries a feeling of hope — ƿ૯ωძɿ૯ƿɿ૯ (@pewdiepie) February 9, 2019

Meanwhile, PewDiePie supporters are working hard to ensure it does not lose the top spot to T-Series. They have been using several tactics like putting a million dollar billboard in Times Square and circulating a supportive tweet by a right-wing political party in the United Kingdom.

T-Series is a household name in India since the 1980s. The music label is led by Bhushan Kumar, the son of T Series founder Gulshan Kumar who was assassinated by the underworld mafia D Company in 1997. T-Series has 29 TV channels in several Indian languages. It hosts some of the biggest Indian artists, drawing millions of views.