5 dead, 27 injured in stampede during Janmashtami celebration in temple near Kolkata

The boundary wall along the path leading to the temple collapsed during heavy rains, injuring the pilgrims. The situation soon turned into a stampede. 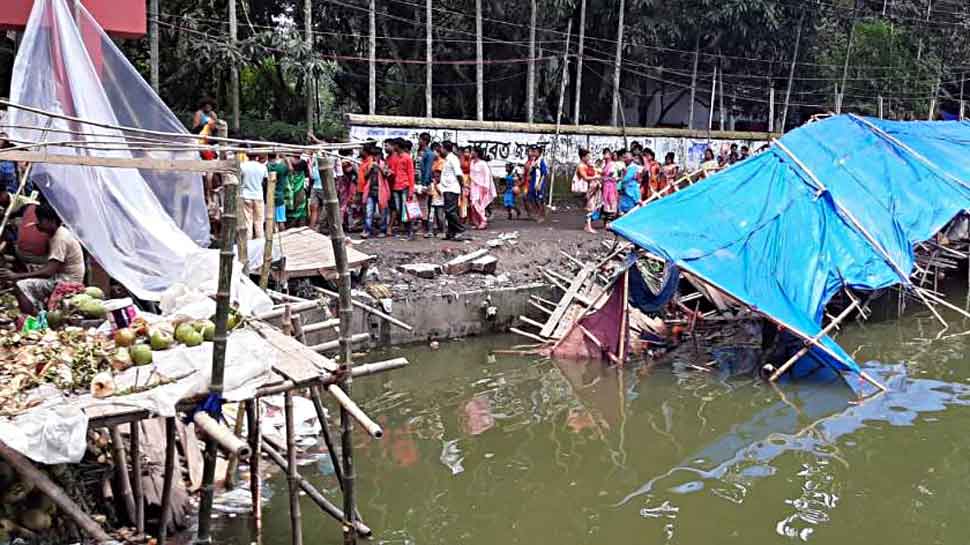 People gather after a wall of a temple, where devotees were gathering to celebrate the Janmashtami festival collapsed due to heavy rains leading to a stampede on Friday. (ANI Photo)
Share:
Written By:

KOLKATA: At least five persons died and 27 others injured in a stampede during Janmashtami celebrations at Baba Loknath Temple in Kachua village in West Bengal's North 24 Parganas district in wee hours of Friday morning. The temple is nearly 30 kilometers away from Kolkata.

Around 3 am, the boundary wall along the path leading to the temple collapsed during heavy rains, injuring pilgrims. The situation soon turned into a stampede.

Those injured were later shifted to Basirhat Hospital, National Medical College and SSKM hospital. Five persons were declared dead on arrival. Out of the 27 injured, five persons are in a critical condition.

The Bharatiya Janata Party (BJP) later alleged that the district administration had failed to take sufficient precautionary measures to avoid a stampede situation. “Kumbh Mela is conducted without any fatalities. Here, we saw how a small gathering could not be controlled and led to a stampede. The district administration is responsible for the stampede,” said Bengal BJP President Dilip Ghosh.

Authorities, however, blamed the incident to overcrowding and inclement weather.

Hours after the incident, state Chief Minister Mamata Banerjee visited injured in the hospitals and enquired after the treatment. She also met the family members of the deceased.

“It is extremely unfortunate. I am told it was raining heavily and people were taking cover when suddenly the boundary wall leading to the temple collapsed. We are ensuring all treatment to the deceased and have ordered an enquiry into the incident. Compensation has been announced for the deceased. Medical expenses are being borne by the government. My condolences to family members of those who passed away and prayers for the injured to recover soon,” said Banerjee.

The Chief Minister announced a compensation of Rs 5 lakh for the next of kin of deceased and Rs 1 lakh to the critically injured persons and Rs 50,000 to other injured persons.