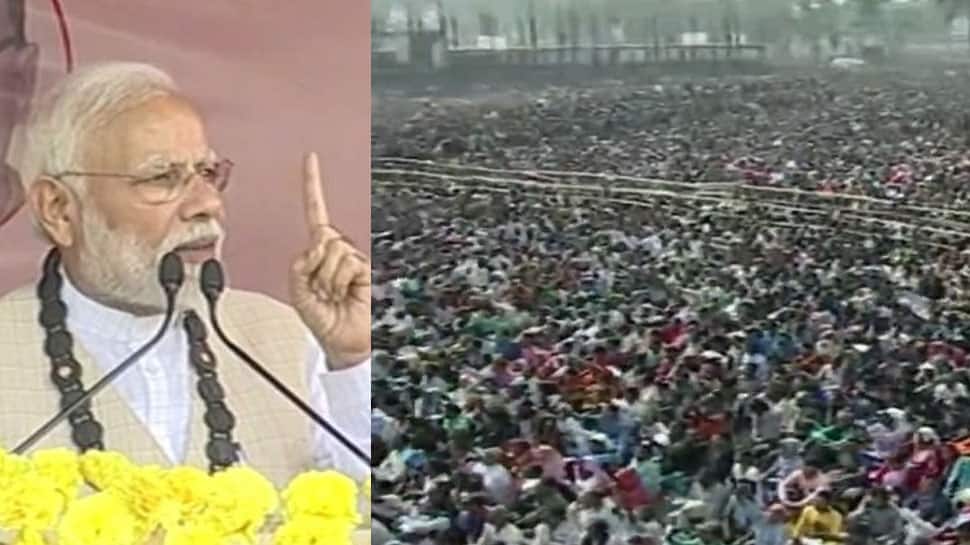 THAKURGANARA: Amid loud cheers and support, Prime Minister Narendra Modi was forced to cut short his speech after a stampede-like situation prevailed at the Thakurnagar rally in West Bengal's North 24 Paraganas on Saturday. Several women and children were injured, a senior police officer said.

The Prime Minister, who kickstarted Bharatiya Janata Party's poll campaign in Bengal with the rally, was welcomed with loud shouts by members of the Scheduled Caste Matua community.

While Modi was addressing the well-attended rally of the Matua community, hundreds of supporters who were standing outside the venue tried to barge into the inner ring of the rally ground, leading to a commotion.

While delivering his speech, the Prime Minister asked the massive crowd on the ground to maintain peace and decorum. Trying to pacify the crowd, he requested the attendees to stay put in their places and stop from making efforts to come on the front side of the inner ring.

However, his pleas went unheard as supporters started throwing chairs inside the no-man zone in front of the stage to make space for others to stand in the inner ring, which was earmarked for women supporters.

Soon, there was commotion which prompted him to cut short his speech barely after 14 minutes.

BJP workers and volunteers were seen rushing to rescue women and children trapped in the crowd.

In the 14-minute-speech, the PM launched a blistering attack on West Bengal Chief Minister and Trinamool Congress chief Mamata Banerjee, accusing her of orchestrating violence against BJP workers.

"Look at the scene (crowd). I can now understand why Didi resorted to violence. Those who advertise to be democratic, kill innocent people," he quipped.

Modi also made a strong pitch for the passage of the Citizenship (Amendment) Bill that seeks to accord Indian citizenship to non-Muslim minorities from Pakistan, Afghanistan and Bangladesh who fled their countries due to religious persecution.

Later, he trained his guns at Congress party, accusing his political rivals of misleading the distressed farming community through farm loan waivers.

“In the name of loan waiver, farmers of the country have been duped by all the political parties,” said the PM.

“There will be no syndicate tax, no obstacles. The people will directly receive the Rs. 6,000 meant for them under the new budget.The farmers can use this money to meet the expenditures needed for agriculture,” he added while referring to Friday's Interim Budget.

The Prime Minister will address another rally at the industrial town of Durgapur later in the day.