In view of tension prevailing in the area, the district administration shut down internet services for an indefinite period in Basirhat. 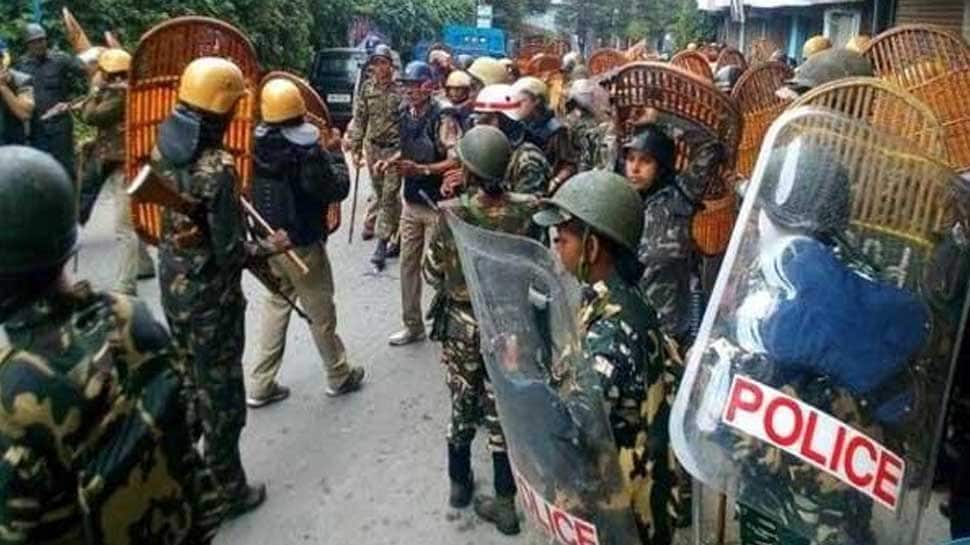 KOLKATA: A day after massive clashes erupted between Trinamool Congress (TMC) and the Bharatiya Janta Party (BJP) workers in Sandeshkhali in Basirhat located in North 24 Parganas district of West Bengal claiming at least three lives, a day-long drama prevailed in the area.

In view of tension prevailing in the area, the district administration shut down internet services for an indefinite period in Basirhat.

While the police carried out massive searches for the missing party workers affiliated to both the parties - Trinamool Congress and BJP, they remained untraceable. Police also deployed reserve force besides deploying armed personnel and Rapid Action Force (RAF) to maintain the law and order situation in the area.

The situation turned more volatile when the BJP delegation leading the hearse carrying the two deceased BJP workers were stopped by the police from taking the dead bodies to Kolkata.

According to sources in the district police, they had prevented the delegation from taking the dead bodies in anticipation that the party might take out a procession with the bodies and may lead to deterioration in the law and order situation. However, despite assurances from the BJP that they will not take out any procession, police did not allow them.

The party had planned last rites of the two BJP workers in Kolkata after party workers would pay their last respects to them at the party headquarters.

Eventually, the party had to drop the idea of last rites in Kolkata and had to return to their village in Sandeshkhali.

“We were stopped at three places. I had assured the police that there will be no marches. We will peacefully take the bodies to the party office so that others can pay their tribute before their cremation. What kind of rule is this? Democracy is being strangulated in this state. I have spoken to Governor Keshari Nath Tripathi, who has assured me that he will speak to senior officials. Police couldn't prevent the murders and are now stopping us from cremating the dead bodies,” said senior BJP leader Rahul Sinha.

This apart, the Central government took cognisance of the incident and the Union Home Ministry sought a report from the state government. “The so-called advisory from MHA to the West Bengal government on the law enforcement machinery in the State is nothing but a political conspiracy. We will respond appropriately,” said TMC general secretary Partha Chatterjee.

The Governor too expressed concerns over the prevailing situation in the state. “Governor KN Tripathi is very sad at the unfortunate loss of lives and properties of the citizens. He extends his heartfelt sympathy for the families and near and dear ones of the deceased. He appeals to all concerned to see to it that no violent incidents take place and peace and harmony prevail in the state,” read a release from Governor’s House.

Meanwhile, the BJP has called a 12-hour bandh in Basirhat on Monday condemning the incident and also announced that the party will be observing a black day across the state on the same day.