The Ethiopian Airlines 737 Max 8 plunged into farmland minutes after take-off from Addis Ababa for Nairobi on Sunday. 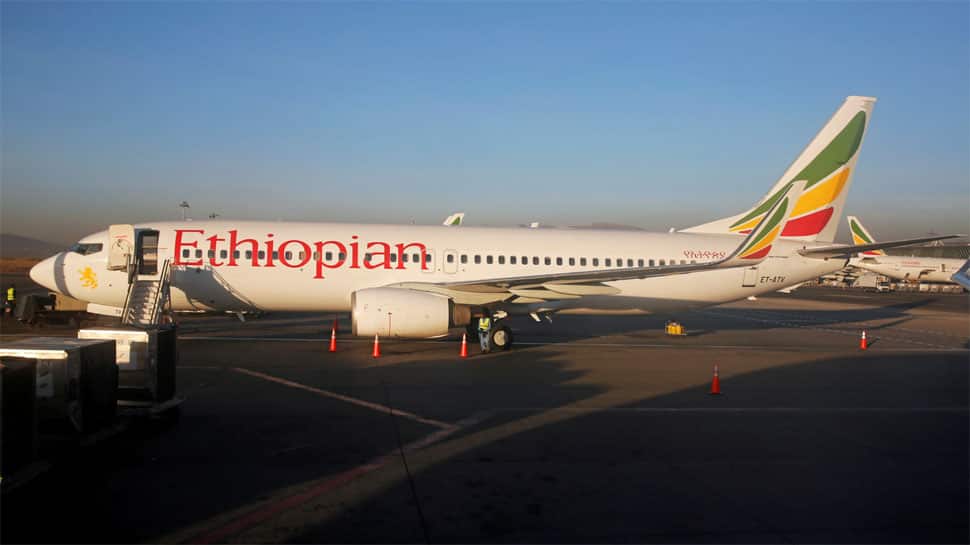 GARA-BOKKA, Ethiopia: China and Indonesia grounded their fleets of Boeing`s 737 MAX 8 aircraft on Monday as witnesses recalled the terrifying spectacle of smoke and debris trailing from an Ethiopian Airlines plane before it crashed killing 157 people.

The disaster came just months after a jet of the same model came down in Indonesia killing 189 people, and prompted a global aviation safety scare. The Ethiopian Airlines 737 Max 8 plunged into farmland minutes after take-off from Addis Ababa for Nairobi on Sunday.

The victims came from more than 30 nations and included 22 United Nations` staff.

"The plane was very close to the ground and it made a turn. We looked and saw papers falling off the plane," Malka Galato, the farmer whose land the plane crashed on, told Reuters from the rural area where horse-drawn carriages ply rough roads.

"Cows that were grazing in the fields ran in panic ... There was smoke and sparks coming from the back of the plane."

The plane tried to climb but failed, then swerved sharply trailing white smoke and objects including clothes before crashing, said farmer Tamirat Abera, who was walking nearby.

Investigators seeking to find the cause of the crash discovered the black box with both the cockpit voice recorder and digital flight data on Monday, Ethiopian state TV said.

Boeing`s share price plunged at the prospect that two such crashes in such a short time could reveal flaws in its new plane. The company has already accepted orders for more than 5,000 of the new, high fuel economy planes, which entered service less than two years ago and are set to be the workhorses for airlines around the globe for decades.

The 737 line, which has flown for more than 50 years, is the world`s best selling modern passenger aircraft and viewed as one of the industry`s most reliable.

The new MAX 8 variant, with bigger engines designed to use less fuel, entered service in 2017. By the end of January this year, Boeing had delivered 350 of the new jets to customers, with another 4,661 on order.

Its stock slid 10 percent in early trading on Monday.

The move, if maintained through normal trading hours, would be the biggest fall in Boeing`s stock in nearly two decades, halting a surge that has seen it triple in value in just over three years to a record high of $446 last week. Various worried nations took swift action.

Ethiopian Airlines, which has four other 737 MAX 8 jets, said it was grounding them as a precaution. China also ordered its airlines to suspend their 737 MAX 8 jets by 6 p.m.

Indonesia, where a Lion Air 737 Max 8 went down in October, also said it would temporarily ground the model for inspection. Cayman Airways grounded both of its new 737 MAX 8 jets temporarily too, while India announced a safety review.

At the crash site, men in Red Cross jackets and face masks picked through a large crater, stacking clothes in a heap on one side and wrapping corpses in white body bags.

The smell of jet fuel mixed with burned flesh hung in the air, as local villagers watched. Another heap contained twisted green-and-yellow metal from the fuselage. A lone engine with dents around the edges and several damaged tyres lay nearby.

The dead included aid workers, doctors, professors of literature and botany, a law student, a newly-wed woman, a father soon expecting a child, and a couple who just had a baby.

In Nairobi, a major hub for aid workers and diplomats, a summit opened with a moment of silence and tears for the U.N. members killed. In New York, the 15-member U.N. Security Council also stood to remember the dead.

"Our colleagues were women and men - junior professionals and seasoned officials - hailing from all corners of the globe," U.N. Secretary-General Antonio Guterres said. "They all had one thing in common - a spirit to serve the people of the world and to make it a better place for us all."

Ethiopian Airlines said its pilot Yared Getachew, who was a dual Ethiopian-Kenyan national, had a "commendable record" and more than 8,000 hours of flying experience.

The airplane was received in November 2018, had flown more than 1,200 hours, and returned from Johannesburg earlier on Sunday, Chief Executive Tewolde GebreMariam said.

The flight had unstable vertical speed after take-off, the flight tracking website Flightradar24 tweeted. The Sweden-based service said the jet had climbed almost 1,000 feet after taking off from Addis Ababa, a hot and high-altitude airport whose thinner air requires extra effort from an aircraft`s engines.

It dipped about 450 feet before rapidly climbing another 900 feet until the point where satellite tracking data was lost.