After inflicting 'extreme damage' on Bahamas, Hurricane Dorian on path to Florida

Aerial video recorded over the Bahamas` Great Abaco Island showed mile upon mile of flooded neighbourhoods, pulverized buildings, upturned boats and shipping containers scattered like Lego toys. Many buildings that had not been flattened had walls or roofs partly ripped away. 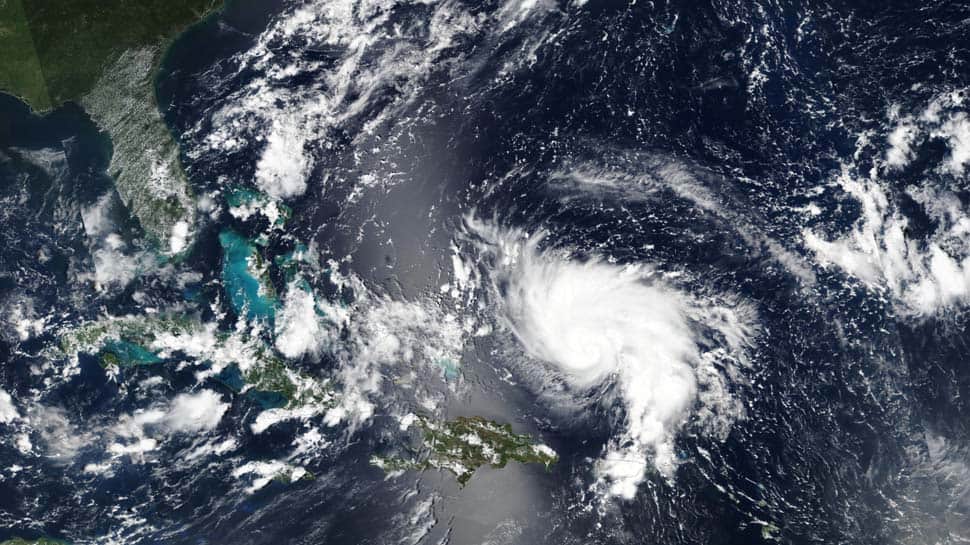 MARSH HARBOUR: Hurricane Dorian has left much of tourism-dependent Bahamas in ruins and relief officials on Tuesday were preparing for an unfolding humanitarian crisis with the scale of the catastrophe only beginning to emerge. Aerial video recorded over the Bahamas` Great Abaco Island showed mile upon mile of flooded neighbourhoods, pulverized buildings, upturned boats and shipping containers scattered like Lego toys. Many buildings that had not been flattened had walls or roofs partly ripped away.

While its winds had diminished to a Category 2 storm on the five-step Saffir-Simpson scale of intensity, Dorian expanded in size and picked up speed on Tuesday. Forecasters said it would come "dangerously close" in the next 36 hours to Florida`s east coast, where more than a million people have been ordered evacuated.

"It was a horrific sight," Bahamas opposition leader Philip Brave Davis told reporters following a flight over Abaco in a U.S. Coast Guard aircraft. "Communities are cut off and roads are underwater still," Brave Davis told reporters at Nassau airport after returning from the flight, together with Bahamas Prime Minister Hubert Minnis in a Facebook Live video. Minnis on Monday put the death toll at seven, with more deaths expected.

One Twitter post with the handle @mvp242 described how "victims are being loaded on flatbed trucks across Abaco," showing a rain-blurred photo of limp bodies strewn across a truck bed. Other messages on Twitter described whole communities being swept away. A video posted on Twitter showed a storm surge rising up inside a two-story home, the sofa and other furniture floating toward the second floor. Another showed residents trying to swim from one home to another through the surge.

In another, a woman repeatedly says: "Please, pray for us," after the storm ripped the roof off her apartment building and she sheltered on top with her 4-month old baby and other residents. "Some people the water just sucked them," she said. "Some people didn`t make it."

With telephones - including emergency lines - down on Abaco and Grand Bahama islands, residents posted lists of missing loved ones across social media platforms. A single Facebook post inviting the names of missing people by local media outlet Our News Bahamas had 1,600 comments listing lost family members since it went live late on Tuesday morning.

"There are many difficult days, weeks and months ahead of us as a people and as a country," Minnis tweeted. "Relief and rapid assessment teams are standing by and will be deployed to Abaco and Grand Bahama as soon as possible." The Miami-based U.S. National Hurricane Center said storm surges in Grand Bahama were 12 feet to 18 feet (3.7-5.5 m) above normal tide levels.

The NHS said in a 8 p.m. EDT (0000 GMT) advisory that Dorian had sustained winds of 110 miles per hour (175 kph) and was moving northwest at 6 mph (8 kph), as it churned about 105 miles 170 km) east of Cape Canaveral, Florida. Hurricane-force winds had expanded to 60 miles (95 km) from the storm`s core. "Dorian is expected to remain a powerful hurricane during the next couple of days," the NHS said.

The exact toll of the devastation in the Bahamas will not be clear until the storm completely passes and rescue crews can get on the ground, said Theo Neilly, the Bahamian consul general in Washington. Dorian has battered the Bahamas for the past three days. "We expect it to be very devastating and the damage to be extreme," Neilly said.

As many as 13,000 homes in the Bahamas may have been destroyed or severely damaged, the International Federation of Red Cross and Red Crescent Societies said, in the strongest storm ever to hit the Bahamas. The Abaco Islands in the northern Bahamas may require food for 14,500 people and Grand Bahama for 45,700 people, the U.N. World Food Programme said in a statement. The preliminary estimates were based on an assessment by representatives from Caribbean countries, the WFP and other organizations.

The U.S. Agency for International Development said on twitter it was "airlifting critical relief items - like plastic sheeting, hygiene kits, and water containers" from Miami to the Bahamas. The U.S. Coast Guard said four of its helicopters were assisting in the humanitarian effort.

Dorian, which killed one person in Puerto Rico before bashing into the Bahamas on Sunday, is tied for the second-strongest Atlantic storm to make landfall with Gilbert (1988), Wilma (2005) and the 1935 Labor Day hurricane. It was expected to hit Florida with hurricane conditions overnight, before bringing its powerful winds and dangerous surf along the coasts of Georgia, South Carolina and North Carolina by late Thursday.
The governors of those states have ordered evacuations of coastal counties.

Forecasters have told Floridians to heed mandatory evacuation orders now in effect for at least nine counties. Dorian could drive seawater inland as it approaches, with parts of the northern Florida and Georgia coasts seeing as much as 7 feet (2 m), said NHC Director Ken Graham. After days of warnings to flee a storm that at its peak was rated at the top of the scale of hurricane strength, many residents of Florida`s coast remained unsure whether to wait it out or evacuate.

"I know it`s a mandatory evacuation, but everyone I talked to is staying, and I don`t know what to do. But I`m going to be ready and packed up in case I need to get on the road if they close those bridges," said Linda Cassano, a 53-year-old beautician who lives on Jacksonville Beach as she stocked up on water and food.