Then Jocellyn ran through a list of Duterte`s female critics that included his vice president, a prominent senator who is now in jail and the head of the Philippines Supreme Court. 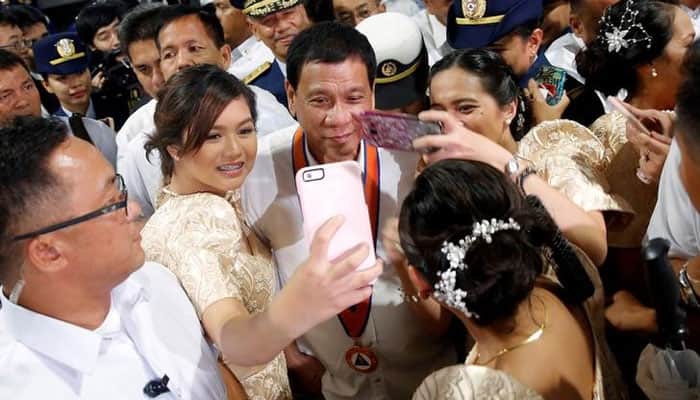 Philippines: Philippines President Rodrigo Duterte has a problem with women, says the woman who has known him longer than perhaps any other: his sister Jocellyn.

"He`s a chauvinist," she told Reuters in a recent interview. "When he sees a woman who fights him, it really gets his ire."

Then Jocellyn ran through a list of Duterte`s female critics that included his vice president, a prominent senator who is now in jail and the head of the Philippines Supreme Court.

All three have sparred with Duterte after denouncing his brutal war on drugs, which has killed thousands of people in the Asian nation since he took office in June 2016.

Duterte has joked about rape, insulted the Pope and baffled friends and foes with often contradictory public statements. Neither this nor his profanity-laden reactions to women critics, seem to have dented his popularity among Filipinos.

The 72-year-old President is a self-confessed womaniser who once told a large gathering of local officials, "I can`t imagine life without Viagra."

On the campaign trail last year, he joked about the gang rape of an Australian missionary who was killed in a prison riot. Speaking to Philippine troops in May, he said he would take responsibility for any rape they might commit.

But women`s rights advocates also praise him for handing out free contraceptives in his hometown, Davao City, where he was mayor for 22 years, and for championing a reproductive health bill opposed by the country`s influential Catholic Church.

In a recent statement, even Human Rights Watch - a fervent critic of the drug war - acknowledged Duterte`s "strong support" for legislation aimed at protecting and promoting women.

After nearly 15 months in power, he remains highly popular with men and women alike, according to the latest survey by Manila-based pollster Social Weather Stations.

While foreigners frown at Duterte`s rape jokes, says Gina Lopez, a former environment secretary in Duterte`s male-dominated cabinet, Filipinos judge him by his actions not his words.

"When I see him dealing with women in the cabinet or whatever, he has been very above-board, very decent," she told Reuters.

She said this decency also once extended to Vice-President Leni Robredo, who has publicly fallen out with Duterte. She is from an opposition party and was elected separately. "He really liked Leni. They got along and he was always flirting," said Lopez. "That`s what men do, right?"

In a statement to Reuters, the president`s office called Duterte "an advocate of women`s rights" who had launched a "massive campaign against gender bias" while mayor of Davao.

As president, it added, he had "hand-picked the best and brightest women" for his cabinet. Three of the country`s 25 cabinet secretaries or ministers are women.

Duterte spends up to four days a week in his far-flung hometown Davao, ruling a nation of 100 million people not from the presidential palace in the capital, Manila, but from a modest house shaded by a jackfruit tree. Duterte was mayor of Davao for 22 years.

He sleeps until lunchtime, holds cabinet meetings infrequently and sometimes announces major policies without forewarning senior officials, leaving them scrambling to catch up.

Duterte`s volatility has baffled Washington, which has long seen the Philippines as a bulwark against Chinese expansionism. He has courted Beijing and publicly berated the United States in rambling speeches.

Much of Duterte`s venom is reserved for women who oppose him.

In August, he called Agnes Callamard, a UN special rapporteur on extrajudicial killings, a "daughter of a whore" after she condemned the police shooting of a teenage drug suspect.

"He`s a misogynist," said Senator Leila de Lima, who spoke to Reuters at a police detention facility in Manila.

De Lima was arrested in February on drugs charges she says were trumped up as part of a presidential vendetta. "To him, women are inferior," she said. "It`s totally insulting to him that a woman would be fighting him."

According to Jocellyn Duterte, Duterte is also fighting with the woman he hopes will cement his political legacy: his daughter Sara.

Sara Duterte reluctantly replaced her father as mayor of Davao City in the southern Philippines when he became president. Father and daughter barely speak, said Jocellyn.

"I know in his quiet moments he considers himself a failure as a father because of Sara fighting with him," she said.

Jocellyn said she had her own problems with her older brother but they now get along. They have two other brothers.

Jocellyn, who refers to the president as "the mayor," said Duterte still eats the same simple food their mother Soledad once cooked: cheap fish simmered in vinegar.

She also traces Duterte`s authoritarianism to Soledad, who punished her children with a horsewhip or made them kneel at an altar for hours.

"You can see that in the mayor," says Jocellyn. "Sometimes people perceive it as arrogance or call it close to being a dictator. But we grew up in that atmosphere."

Their father Vicente, also a politician, was often absent, and the young Duterte saw the bodyguards, police and soldiers around him as role models, his sister said. He grew up in a macho culture where wives and daughters were expected to be submissive, Jocellyn said.

His daughter Sara is anything but. In 2011, during her first term as Davao`s mayor, she was caught on camera punching a local official who angered her.

In 2016, Sara ran for mayor again, but only because she was "pressured" by her father`s supporters, she told Reuters. "If it were up to me, I would not have run," she said.

She said she now only saw her father on special occasions, such as birthdays and Christmas, but denied they had differences. "He`s very busy," she said.

Duterte and his daughter have "a normal Filipino parent-child relationship which has its own share of ups and downs," said the president`s office in its statement.

Like her father, Sara is blunt, down-to-earth and thronged by admirers at public appearances in Davao.

She told Reuters she wanted to practice law and, once her three-year term as mayor was up, had no wish or intention to continue in politics.

But in a country famous for political dynasties spanning many generations, Duterte wants his daughter to "preserve what the family has done for the city," said Jocellyn.

"He is trying to instill in Sara that it is our legacy," she said. "Maybe she needs more time."