Amsterdam suspends all flight services due to severe storm

At least 260 flights were scrapped, while trains, trams and buses were halted across the country after the highest weather alert was issued. 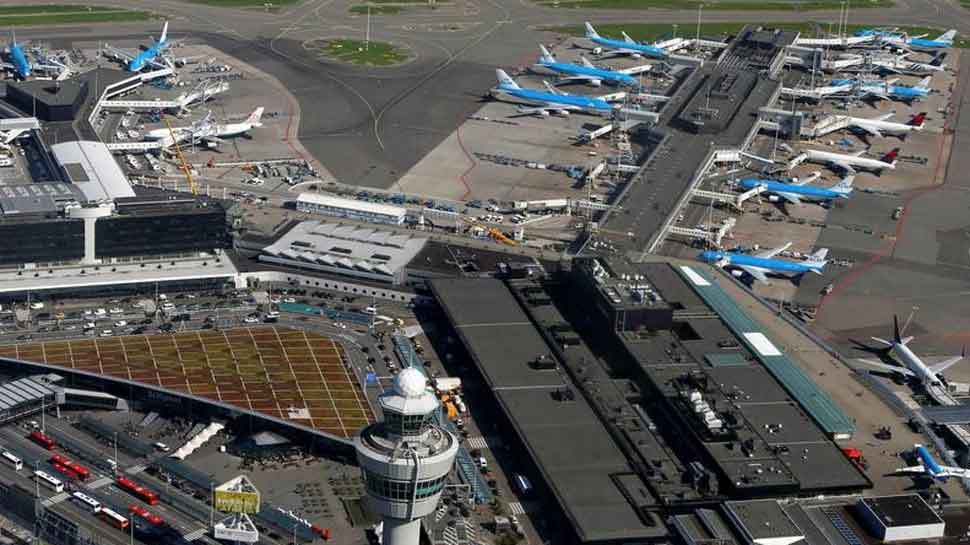 AMSTERDAM: Amsterdam`s Schiphol airport briefly suspended all air traffic on Thursday due to a severe storm, as gusts of up to 140 kph (90 mph) blew down trees and damaged buildings.

"Due to severe weather conditions: all air traffic has been suspended until further notice," Schiphol airport, one of Europe's busiest flight hubs, said in a tweet. Air traffic will "gradually restart around 12:00 pm (1100 GMT)", the airport said.

Status update due to severe weather conditions: all air traffic has been suspended until further notice.

The cancellations notice came shortly after the Dutch national weather service upped its warning to the highest level.

At least 260 flights were scrapped, while trains, trams and buses were halted across the country after the highest weather alert was issued. Schiphol later said some flights would resume as the storm moved inland, but that there would be severe delays.

In Germany, railway operator Deutsche Bahn said it had suspended all services in the western state of North Rhine-Westphalia, the country's most populous state, leaving hundreds of thousands of travellers and commuters stranded. "Since this affects many long-distance connections, there are effects on the entire rail services, also internationally," Deutsche Bahn said.

The westerly storms blowing off the North Sea meant "a code red is in force with very heavy gusts of up to 140 kilometres an hour expected in some areas," the national weather service (KNMI) said.

"Such heavy gusts bring with them a danger to people and traffic," it added, warning of the risks of falling trees and urging people not to venture go into the seas, with many Dutch surfers often seen seeking out the highest waves.

NS, the Dutch national railway company announced that "due to the storm all trains are halted until further notice" apart from a small local service in northern Groningen and southern Limburg. It was already grappling with "a large number of breakdowns" which meant even after the storm it could take some time for normal service to be restored, NS added in a statement.

The high winds were expected to decrease by later in the afternoon, but Dutch officials had already closed to all traffic several more exposed roads and bridges crossing different dykes. All fishing boats were also sheltering in ports, while ferries to the far-flung northern Texel island were stopped.

Despite battening down the hatches for the storm's arrival since Wednesday, there were still difficulties on the roads. Many streets were blocked by falling trees and branches, while the national traffic service (VID) warned of major problems on the motorways due to blown over trucks. By late morning the VID had counted 25 large lorries which had been toppled by the gale-force winds, leading to huge congestion on six of the country's main road arteries.

Southern Rotterdam, Europe's busiest cargo port, was now "virtually unreachable from the north due to problems" on three of the main motorways into the city, the VID added.