DF-41 is now the world's longest range missile ahead of US LGM-30 Minuteman which has a reported range of 13,000 kilometers 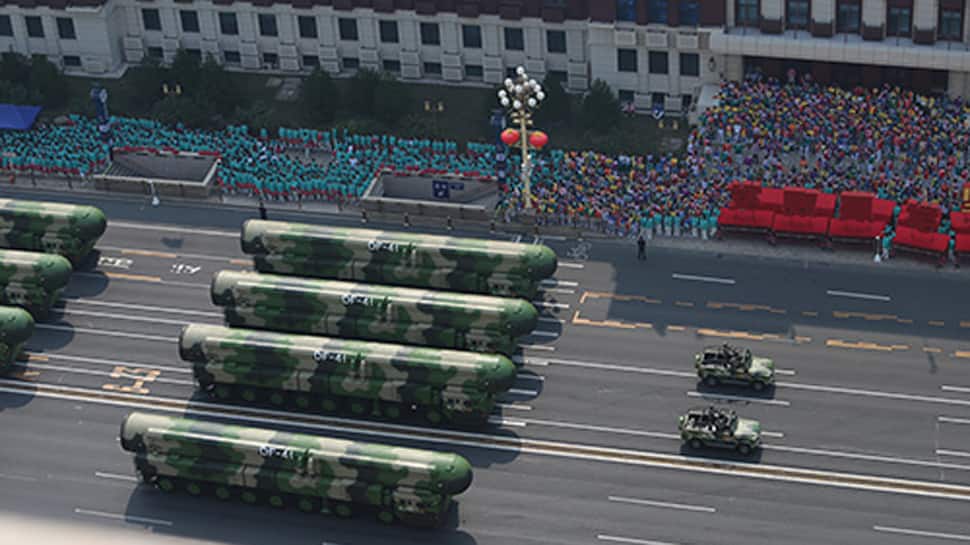 According to reports, 15,000 military personnel participated in the parade, which included 59 different elements of the military. The Chinese military also showcased more than 160 aircraft and 580 pieces of domestically manufactured equipment during the parade. It is learnt that 40% of the weapons unveiled during the military parade have never been revealed in public.

This is China's most advanced intercontinental ballistic missile (ICBM) and it has an operational range of more than 14, 000 kilometers. The DF-41 is capable of carrying about 10 independently targetable nuclear warheads which can hit any target on earth. DF-41 is now the world's longest range missile ahead of US LGM-30 Minuteman which has a reported range of 13,000 kilometers. According to Chinese defence experts, the missile is capable of striking the continental US within 30 minutes.

Dongfeng-17 is a short-to-medium-range missile which is capable of launching a hypersonic glide vehicle. According to Washington Post, this missile could exceed the speed of sound and penetrat US missile shields. The DF-17 is equipped with a maneuverable reentry vehicle, which allows it to shift targets in flight. The DF-17 is capable of delivering both nuclear and conventional payloads.

Another advanced weapon which was displayed by China during the National Day Parade was HQ-9B surface-to-air missiles. According to Aljazeera, this missile is capable of intercepting multiple air strike weapons in a complex electro-magnetic environment. It is learnt that the HQ-9B is capable of hitting target aircraft 100 nautical miles away, which means that these missiles could target nearly any ship and most aircraft in the southern half of the South China Sea.

China also displayed its DF-26 intermediate range missile, dubbed "Guam killer" during the National Day parade in Beijing. With a range of 3,000–5,471 km, DF-26 could be used in the nuclear, conventional, and anti-ship strike roles. This missile is deployed on a 12x12 transporter-erector-launcher (TEL), likely based on CASC developed by Tai'an Corporation.

The Chinese military also displayed a new and advanced radar system which would be able to "detect jets and missiles". It is to be noted that Beijing has been heavily investing in drone technologies in order to boost its military powers.