Fears of another dam burst in Brumadinho on Sunday triggered evacuation sirens in the town before dawn, adding to the anxiety of residents waiting for word about lost relatives and friends. 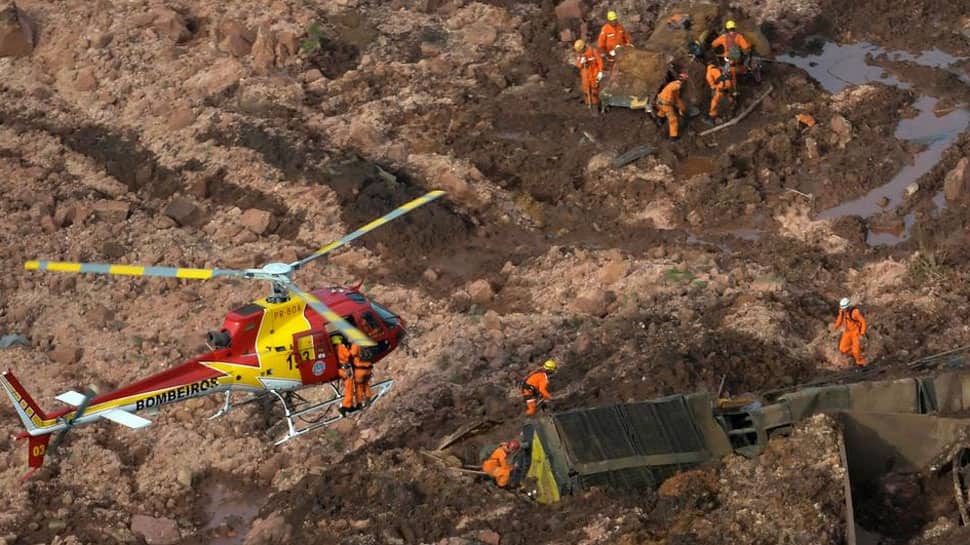 BRAZIL: Brazilian rescuers searched into the night on Sunday for hundreds of people missing after a burst mining dam triggered a deadly mudslide, as the death toll rose to 58 people and was expected to keep climbing more than two days after the disaster.

Rescuers worked past sunset to search a bus that is thought to have bodies inside and a home where three dead were already discovered, state fire department spokesman Pedro Aihara told reporters.

The collapsed dam at Vale SA`s Corrego do Feijao mine buried mining facilities and nearby homes in the town of Brumadinho, killing dozens and leaving the community in shock. "Until the last body is found, the fire department is acting on the possibility there could be people alive," Aihara told reporters. "Obviously, given the nature of the accident, as time passes, this chance will go down."

After announcing the latest number of confirmed dead, state civil defense agency spokesman Flavio Godinho told reporters he expected the death toll to continue rising. Just over 300 people were still missing, with the list of those unaccounted for being constantly updated, Godinho said. Most of the missing are presumed dead, officials said.

The cause of the dam burst remained unclear. Recent inspections did not indicate any problems, according to the German firm that conducted the inspection. Avimar de Melo Barcelos, the mayor of Brumadinho, blasted Vale for being "careless and incompetent," and blamed the mining company for the tragedy and the state of Minas Gerais for poor oversight. He vowed to fine the miner 100 million reais ($26.5 million).

Vale Chief Executive Officer Fabio Schvartsman said in a television interview on Sunday the disaster happened even after the company followed experts` safety recommendations. "I`m not a mining technician. I followed the technicians` advice and you see what happened. It didn`t work," Schvartsman said. "We are 100 percent within all the standards, and that didn`t do it."

The CEO promised "to go above and beyond any national or international standards. ... We will create a cushion of safety far superior to what we have today to guarantee this never happens again."
ECHOES OF SAMARCO.

In 2015, a tailings dam collapsed at an iron ore mine belonging to Samarco Mineracao SA, a Vale joint venture with BHP Group, less than 100 km (60 miles) to the east. The resulting torrent of toxic mud killed 19 people, buried a small village and contaminated a major river in Brazil`s worst environmental disaster on record.

Fears of another dam burst in Brumadinho on Sunday triggered evacuation sirens in the town before dawn, adding to the anxiety of residents waiting for word about lost relatives and friends.

Firefighters halted searching and evacuated thousands from their homes until the afternoon when civil defense authorities ruled out the risk of another dam burst, calling off the evacuation and reinstating search-and-rescue efforts.

Aihara initially said 24,000 people would be evacuated, but later lowered the total to 3,000. In all, 24,000 people have been affected by the disaster, he said. Renato Maia, a 44-year-old salesman whose best friend`s daughter remained missing, fled his home in panic early on Sunday and waited for hours with his wife at a police barricade on the outskirts of town.

"We`re all fed up with Vale ... and this is really adding to the tension," he said. "It was a huge tragedy and now we don`t know what might come next."

The Brazilian government ordered Vale to halt operations at the Corrego do Feijao mining complex. On Sunday, courts nearly doubled to 11 billion reais the amount of Vale assets frozen in anticipation of damages and fines.

Federal prosecutor Jose Adercio Sampaio told Reuters on Saturday that state and federal authorities had failed to apply more stringent regulation to the hundreds of tailings dams around the country.
Schvartsman said all of Vale`s tailings dams were checked after the 2015 disaster and periodic reviews carried out.