Chinese embassy's letter has strongly opposed the platform given to Taiwan FM by the news channel, calling Joseph Wu a separatist. 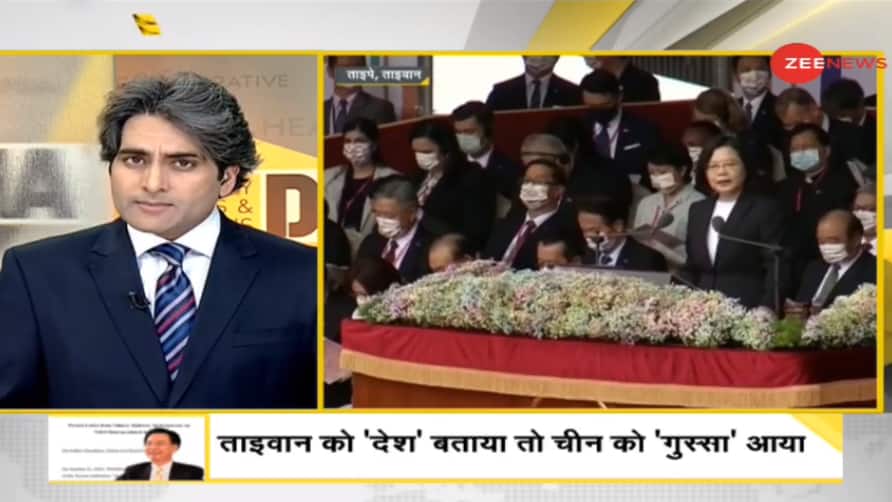 New Delhi: China is irked over the recent interview of Taiwanese Foreign Minister Joseph Wu with WION, an international news channel of Zee Media, as it lodged a strong protest against media coverage given to the head of Taiwan authorities’ foreign relations department. In a statement, the Chinese embassy in New Delhi asked WION to stick to the Indian government's position on Taiwan and do not violate the One-China principle by providing a platform for those with 'ulterior motives'.

The statement said, "There is but one China in the world and the Government of the People's Republic of China is the sole legitimate government representing the whole of China. Taiwan is an inalienable part of China's territory. These facts are recognized by UN resolution and constitute the universal consensus of the international community. All countries that have diplomatic relations with China should firmly honour their commitment to the One-China policy, which is also the Indian government's official standing."

In his interview with WION on October 21, Taiwan's Foreign Minister Joseph Wu spoke openly on China's atrocities and its dangerous intentions. Wu also expressed apprehension that China may invade the country as the Xi Jinping regime is trying to destabilize the region. He, however, added that the US will help Taiwan if China launches attacks, and asserted that his nation is fully prepared to defend itself.

Taiwan is located 4000 kilometers away from India in East Asia. China considers Taiwan as its extended territory, but people there otherwise. The Government of Taiwan believes that it is the real China or Republic Of China, and considers the People's Republic of China as the fake nation.

Chinese embassy's letter has strongly opposed the platform given to Taiwan FM by the news channel, calling Joseph Wu a separatist. On the contrary, Taiwan is a democratic country where people elect their leaders through a democratic process. The letter presented several arguments to prove that Taiwan is its part, expressing it is not happy with those who consider Taiwan a separate country.

The DNA report will analyse this crucial international issue to understand the truth behind China's claim that it has been propagating for the last 70 years. In his interview, Joseph Wu stressed the fact that Taiwan is a separate country and China wants to merge Taiwan with Main Land China through military action.

We would like to ask China if, under One China Policy, Taiwan is part of China then under One India Policy, China should also respect Indian territories of Kashmir, Ladakh, and Arunachal Pradesh. The Chinese Embassy's letter unveils the Communist nation's hypocrisy as it also tried to put pressure on the Indian media. This resentment on part of China is not new, it has already been exposed for spying against Indian people.

After this Chinese Embassy letter, Taiwan has also issued a letter to reject China's claims, asserting that Taiwan is not a part of the People's Republic of China. In a tweet, Taiwan's Ministry of Foreign Affairs also praised WION and said that China is trying to suppress the Indian press.

Taiwanese Foreign Minister's interview on WION and Chinese reaction dominated the news channels of Taiwan and it became the top headline there.

Every year on October 10, Taiwan celebrates its National Day. On this day, Taiwan's diplomates take part in events across the world. One such event was organised in Fiji, a small country in the Pacific Ocean, and Chinese officials interrupted the programme and also committed violence against Taiwanese diplomates. A Taiwanese diplomat was hospitalized. This incident becomes an international headline and the dispute between Taiwan and China came to the fore on the global forum.

Just before Taiwan's National Day, China's embassy in India also issued a note saying that Indian media should not call Taiwan a separate country as it violates One China Policy while forgetting that India is a democratic nation and Media enjoys the freedom of expression.

Like Tibet, Taiwan is also a weakness of China, which considers these two nations as part of One China Policy, and most of the countries in the world have also agreed to it, but now the time is changing and the Chinese claim is being questioned. China needs to learn to respect the integrity of other countries.

Taiwan is just 100 kilometers away from China. The size of Taiwan is equal to Kerala in India, with a population of 2.40 crore. Taiwan's population density is very high. In India, an average of 382 people live in one square kilometer area while 651 people live in one square kilometer area of Taiwan, whose per capita income is Rs 18,42000 while China's per capita income stands at Rs 7 lakh. Taiwanese people are about two and a half times richer than Chinese people.

Taiwan is far ahead of most European countries, and the prosperity of Taiwan is a big reason for China's greed. 95 percent of people living in Taiwan are of Han Chinese origin, while 92 percent of people living in China are also of this origin. Taiwan, therefore, describes itself as the real China. On the contrary, China also claims that it is the real China and Taiwan is part of it.

From 1683 to 1895, Taiwan was ruled by the Ching dynasty of China. In the early 17th century, a large number of expatriates started arriving in Taiwan from Main Land as life there became very difficult due to different reasons. During Japan and China war in 1885, Japan won the battle, and the Ching dynasty handed over Taiwan to Japan.

During this period, political upheaval began in China, and in 1911, the Chinese Nationalist Party was established in China under the leadership of Sun Yat Sen. This Chinese Nationalist Party had three objectives: First democracy, second economy, and third nationalism. At that time, it was the largest party in China and included people of different ideologies, including Communists.

In the local language, the Chinese Nationalist Party was called the Kuomintang Party. This party had named China the Republic of China, but the Communist Party of China later split from this party and both turned against each other. The political situation in China changed and the Communist Party under Mao Zedong defeated the nationalists in the civil war. After the debacle, the Nationalists fled to Taiwan under the leadership of Chiang Kai-shek, who formed the Kuomintang government in Taiwan.

Surprisingly, Taiwanese people can roam around the world on their country's passports but they cannot enter the office of the United Nations. Until 1987, Taiwan too had a dictatorship, but in 1996, it witnessed first democratic elections and Kuomintang Party emerged as victorious. Later, the Democratic Progressive Party (DPP) was formed and it currently holds power in Taiwan. President Tsai Ing-Wen also hails from the DPP.