More than 730,000 Rohingya fled Myanmar after the military launched a crackdown in western Rakhine state in August 2017. Most now live in crowded refugee camps in Bangladesh. 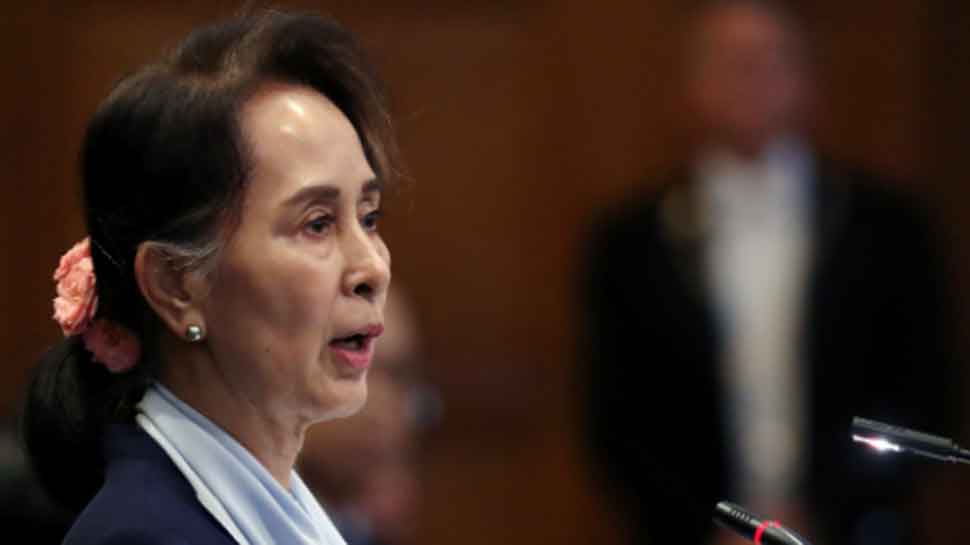 The Hague: Myanmar leader Aung San Suu Kyi said the case brought against her country at the World Court was "incomplete and misleading" as she began her defence to accusations of genocide against the Rohingya Muslim minority on Wednesday.

Gambia, a small West African country, has launched a case against Myanmar at the International Court of Justice, the U.N.`s highest court, alleging it has violated the 1948 Genocide Convention.

Leading Myanmar`s defence herself at the court in The Hague Suu Kyi, Myanmar`s top political leader and a Nobel Peace prize laureate acknowledged disproportionate force may have been used at times by the military, but said the conflict in the western Rakhine state was "complex and not easy to fathom".

"Gambia has placed an incomplete and misleading picture of the factual situation in Rakhine state in Myanmar," she said.

More than 730,000 Rohingya fled Myanmar after the military launched a crackdown in western Rakhine state in August 2017. Most now live in crowded refugee camps in Bangladesh.

Myanmar argues the military "clearance operations" in Rakhine were a justifiable response to acts of terrorism and that its soldiers have acted appropriately.Suu Kyi had listened impassively on Tuesday as lawyers for Gambia detailed graphic testimony of suffering of Rohingya at the hands of the Myanmar military.

A photograph of Suu Kyi with three smiling generals who are also Myanmar government ministers - Lieutenant General Ye Aung, Lieutenant General Sein Win and Lieutenant General Kyaw Swe - was shown in the courtroom by Gambia`s legal team as evidence of what they said were her close ties to the military. It brought widespread reaction from her supporters who denounced it on social media as an attempt to mock her.
In three days of hearings this week, judges are hearing the first phase of the case: Gambia`s request for "provisional measures" - the equivalent of a restraining order against Myanmar to protect the Rohingya population until the case is heard in full.

Gambia has argued it is every country`s duty under the convention to prevent a genocide from taking place. Gambia has political support from the 57-member Organization of Islamic Cooperation, Canada and the Netherlands.

The legal threshold for a finding of genocide is high. Just three cases have been recognised under international law since World War Two: In Cambodia in the late 1970s; In Rwanda in 1994; and at Srebrenica, Bosnia, in 1995.

Although a United Nations fact-finding mission found that "the gravest crimes under international law" had been committed in Myanmar and called for genocide trials, no court has weighed evidence and established a genocide in Myanmar.