Tear gas and rubber bullets were fired by police to disperse peaceful protesters near the White House on Monday (June 1) as US President Donald Trump took a tough stand pledging to deploy Army to end violent protests over the death of a black man named George Floyd in police custody in Minneapolis. 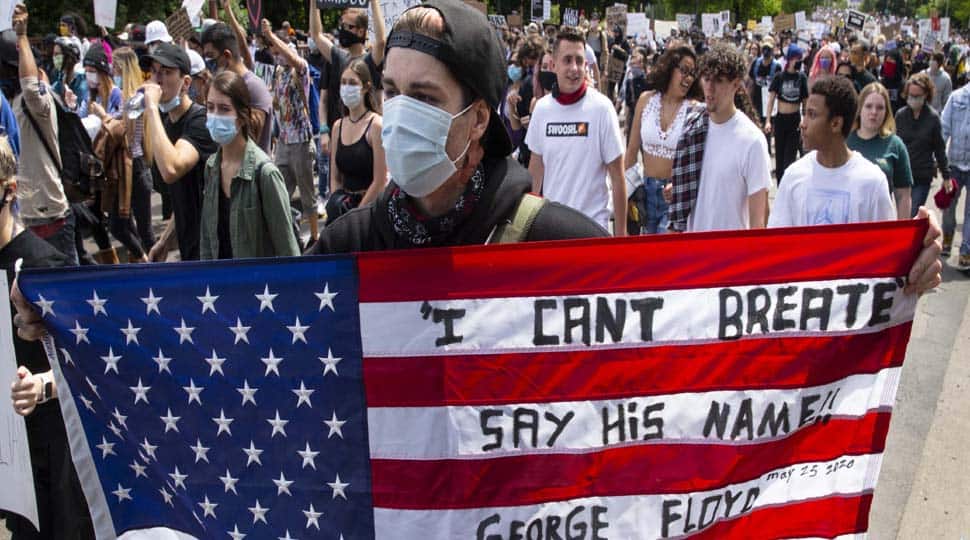 Tear gas and rubber bullets were fired by police to disperse peaceful protesters near the White House on Monday (June 1) as US President Donald Trump took a tough stand pledging to deploy Army to end violent protests over the death of a black man named George Floyd in police custody in Minneapolis.

President Trump addressed the media in the Rose Garden and said that he was committed to end unrest across the nation "now," adding that he would not hesitate to deploy the military if state governors refused to call out the National Guard.

"Mayors and governors must establish an overwhelming law enforcement presence until the violence has been quelled. If a city or state refuses to take the actions that are necessary to defend the life and property of their residents, then I will deploy the United States military and quickly solve the problem for them," Trump said.

President Trump also walked from the White House to nearby St. John`s Episcopal Church along with US Attorney General William Barr and some other senior officials where they all posed for photos.

In a related development, a second autopsy of Floyd released on Monday revealed that his death was a homicide by "mechanical asphyxiation," meaning his oxygen supply was interrupted by some physical force. The report added trhat three officers were responsible for Floyd`s death.

The protests erupted in several cities of the US against the death of black man George Floyd in Minneapolis with the protesters demanding that action be taken against the police officers responsible for the murder of Floyd.

It is to be noted that four police officers in Minneapolis have been sacked for their involvement in Floyd's death. The incident took place on Monday (May 25) when the officers responded to a call about an alleged forgery and found the suspect sitting inside a car. One of the police officers later pinned Floyd on the ground and put his knee on Floyd's neck despite him claiming that he is finding it tough to breathe.

Floyd was spotted by two officers, who claimed that the suspect "physically resisted" them when they asked him to get out. According to police, officers handcuffed Floyd, who "appeared to be suffering medical distress." Police added that the man died at a hospital after few hours.

Several prominent cities in the US remain under curfews and National Guard have been deployed in 23 states and Washington, D.C to maintain law and order. On Monday, the US Justice Department ordered the Bureau of Prisons to send riot-control teams to Miami and Washington, D.C., to keep the demonstrators under control.

Meanwhile, Democratic presidential candidate Joe Biden on Monday met with black community leaders and vowed to constitute a police oversight board within his first 100 days if elected as the next president of the US.