Dorian is predicted to pack winds reaching 209 kph in 72 hours. That would make it a Category 4 storm, the second-strongest on the Saffir-Simpson scale for measuring hurricane intensity. 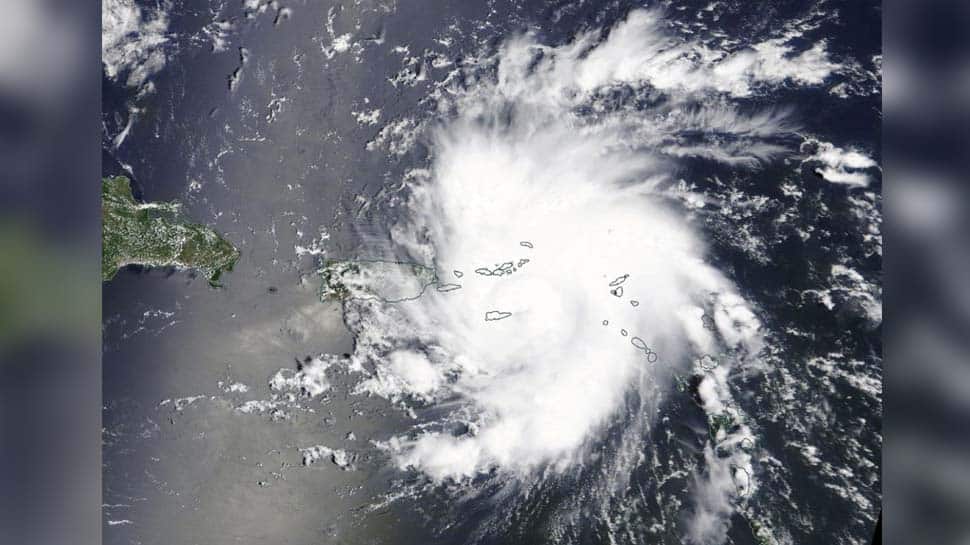 Handout photo of Hurricane Dorian is shown as it nears St. Thomas and the US Virgin Islands (Reuters photo)
Share:
Edited By:

MIAMI: President Donald Trump on Thursday canceled a trip to Poland and Florida`s governor expanded a state of emergency due to Hurricane Dorian, which is forecast to strengthen into a highly dangerous Category 4 storm during the weekend before hitting the state`s Atlantic coast with heavy rains and strong winds.

At the White House, Trump said he was canceling his visit and remaining in the United States "to ensure that all resources of the federal government are focused on the arriving storm."

"It`s something very important for me to be here. The storm looks like it could be a very, very big one indeed," Trump said.

Florida Governor Ron DeSantis had declared a state of emergency for 26 counties on the east coast but extended it on Thursday to the whole of Florida.

Authorities canceled some commercial flights, planned precautions at rocket launch sites along the Space Coast and prepared to give out sand to residents for sandbags ahead of the storm`s arrival.

That would make it a Category 4 storm, the second-strongest on the Saffir-Simpson scale for measuring hurricane intensity.

Dorian, currently a Category 1 hurricane, was packing maximum sustained winds of 85 miles per hour (137 km per hour) on Thursday afternoon, moving toward the northwest at 13 mph (20 kph) some 330 miles (535 km) east of the Bahamas, the hurricane center said.

The center describes Category 4 storms as capable of causing "catastrophic damage" including severe damage to well-built homes. It said in such storms, "Most trees will be snapped or uprooted and power poles downed."

Dorian is likely to make landfall on Florida`s eastern coast on Monday before lingering over central Florida on Tuesday but tropical storm-force winds from Dorian could begin in parts of Florida as early as Saturday evening, the hurricane center said. The storm could affect big population centers as well as major Florida tourist destinations.

"All residents, especially those along the east coast, need to be prepared for possible impacts," DeSantis said in a statement. "As it increases strength, this storm has the potential to severely damage homes, businesses and buildings, which is why all Floridians should remain vigilant. Do not wait until it is too late to make a plan."

Dorian, after sideswiping Caribbean islands without doing major damage, is expected to slam the Bahamas and the southeastern United States with rain, strong winds and life-threatening surf over the next few days.

Jim McKnight, city manager of Cocoa Beach on central Florida`s Atlantic coast, made sure construction sites were secured with possible dangers like scaffolding taken down to prevent flying objects.

"We`re worried. This is not looking good for us. We woke up a lot more scared than we went to bed last night, and the news is not getting any better," said Angela Johnson, 39, bar manager at Coconuts On The Beach, a Cocoa Beach bar and restaurant on the town`s surfing beach.

The biggest hurricane to have come ashore in the area in recent history was Jeanne in 2004, which made land around Port St. Lucie as a Category 3 storm.

Trump said he had talked to Polish President Andrzej Duda, that Vice President Mike Pence would go to Poland in his place, and that his own trip would be rescheduled in the near future.

"The risk of devastating hurricane-force winds along the Florida east coast and peninsula late this weekend and early next week continues to increase," the hurricane center said, warning of heavy rains in portions of the Bahamas, Florida and elsewhere in the southeastern United States.

Miami television station WSVN showed images of dozens of shoppers with empty carts lining up around the outside a supermarket in Davie, part of the Miami metropolitan area, waiting to get inside to buy what supplies they could.

Two flights from the Orlando International Airport to Puerto Rico were canceled.

The Cape Canaveral space center said it would close Saturday afternoon with a skeleton team of roughly 100 staff staying behind in the launch control room to monitor the storm and the site`s aerospace assets.

NASA`s Kennedy Space Center said it would move a 400-foot (122-meter) tall, $650-million mobile launcher structure used to assemble the agency`s rocket for future moon missions from a launchpad and into a building to take shelter during Dorian`s likely impact.

Nearby towns were checking storm drains and back-up generators for waste-water plants as well as setting up round-the-clock shifts for emergency personnel.

The University of Central Florida, one of the largest U.S. universities by student population, said its main campus in Orlando will close on Friday afternoon.