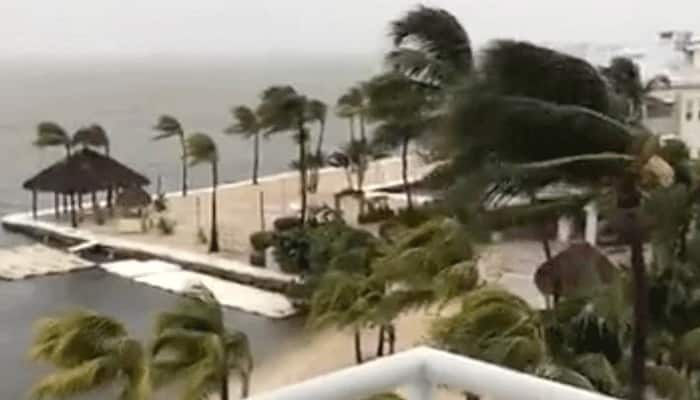 He also warned that devastating storm surges will hit the western coast of Florida as the hurricane churns northward.

"Areas of south Florida and The Keys have had up 12 inches of rain, and storm surge could reach 15 feet on the west coast," he said at a news conference.

He further said, “We have done everything we can to open shelters. We have worked to make sure people get food. We have been working on getting gas in the state for this entire week. Unfortunately, now the ports are closed."

US President Donald Trump reviewed preparedness with his Cabinet colleagues at Camp David in Maryland. He asked federal and state agencies expedite assistance to affected areas.

"This is a storm of enormous destructive power, and I ask everyone in the storm's path to pay heed to all instructions from government officials," he said.

Meanwhile, as the category four storm bore down on Florida this morning, at least three deaths were reported in the state.

A man in Monroe County, which encompasses Key West, was killed after he lost control of a truck that carried a generator as winds whipped at tropical-storm strength, officials said.

The Indian Embassy in the US has opened a round-the-clock helpline number and rushed senior diplomats to Atlanta to lead relief efforts for Indian-Americans stuck in the region.

The hotline number is 202-258-8819. Embassy officials said India's Ambassador to the US Navtej Sarna was closely monitoring the situation, as per PTI.

"Atlanta is fully prepared to take care of evacuees from Florida. Some have already reached. Consulate is on call 24x7," it said in another tweet.

More than one million homes and businesses have lost power in Florida as Hurricane Irma pummeled the southern part of the state, Florida Power and Light said on Sunday.

Irma crossed over the Florida Keys on Sunday morning and was headed for the state`s southwest coast with maximum sustained winds of 130 miles (215 kilometers) per hour, making it a dangerous Category 4 storm, according to the latest update from the US National Hurricane Center.

It is expected to cause billions of dollars in damage to the third-most-populous US state, a major tourism hub with an economy comprising about 5 percent of US gross domestic product, Reuters reported.

The National Weather Service (NWS) said Irma regained strength as a Category 4 storm - after being downgraded to Category 3 for more than 12 hours - as it moved to Florida.