‘I hear you’: When US President Donald Trump used notes to empathise with Florida school shooting survivors

The meeting included six students from Marjory Stoneman Douglas High School in Parkland, Florida, where 17 students and educators were slain. 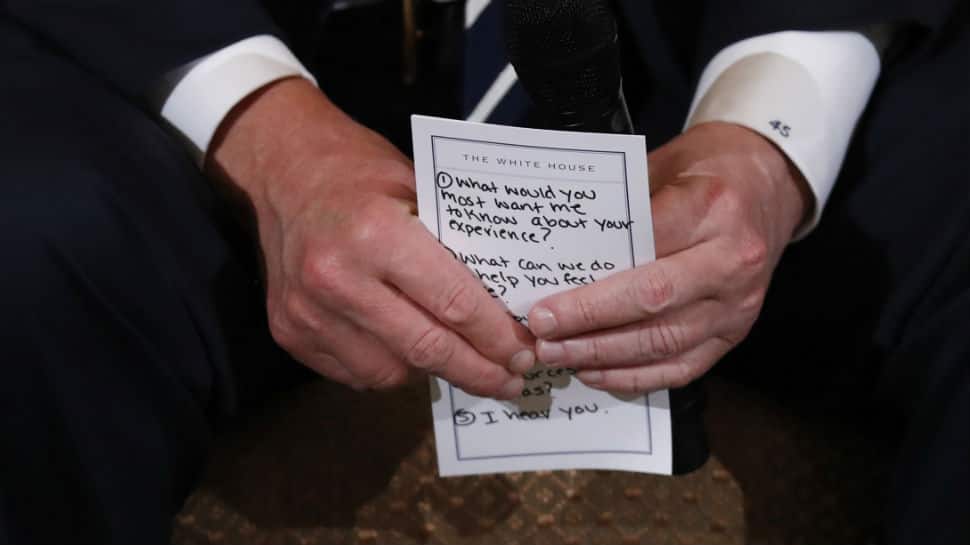 US President Donald Trump on Wednesday met students who survived Florida high school shooting, wherein at least 17 people were killed by a gunman on February 14, at White House. He heard the stories of the survivors, and even suggested that teachers need to be armed to help prevent such massacres.

He sat in the middle of a semi-circle in the State Dining Room of the White House, listening intently as students wept and pleaded for change. He vowed to take steps to improve background checks for gun buyers.

Hours after the meeting, it is now a topic of discussion on different media over a handout that the US President carried during the meeting. CNN reported that Trump, who appeared emotional during the meet and talked to the children and parents of those who died during the attack with empathy, was “holding a piece of White House stationary with five discussion points written in black matter”.

Three of the five points mentioned were:

1. What would you most want me to know about your experience?

2. What can we do to help you feel safe?

During the meeting, Trump also acknowledged that the idea of arming teachers would be controversial when he said, "If you had a teacher ... who was adept at firearms, it could very well end the attack very quickly."

The meeting included six students from Marjory Stoneman Douglas High School in Parkland, Florida, where 17 students and educators were slain on February 14 by a gunman with an AR-15 semi-automatic assault rifle in the second-deadliest shooting at a US public school.

"I don't understand why I can still go in a store and buy a weapon of war, an AR," said Sam Zeif, 18, sobbing after he described texting his family members during the Florida shooting.
"Let's never let this happen again please, please," Zeif said.

Andrew Pollack, whose daughter Meadow Pollack, 18, was killed, shouted: "It should have been one school shooting and we should have fixed it. And I'm pissed - because my daughter - I'm not going to see again."

Trump said his administration would emphasise background checks and mental health in an effort to make schools safer.

"It's not going to be talk like it has been in the past," Trump said.