Indian peacekeepers in Congo garner appreciation for their professionalism

India is the second largest troop contributor to the United Nations Organization Stabilization Mission in the Democratic Republic of the Congo (MONUSCO), with 2,624 peacekeepers and 274 police personnel deployed as of March 2019. 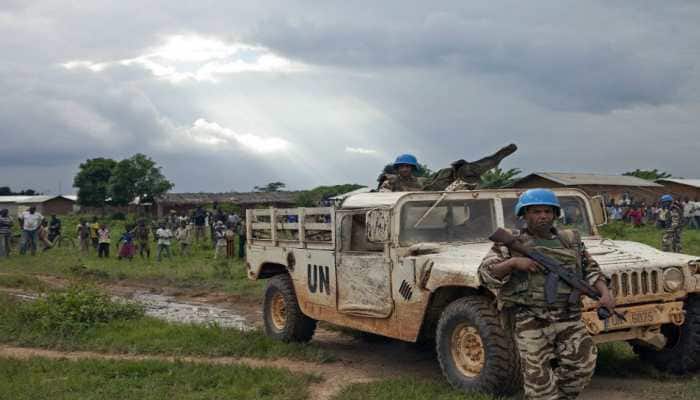 United Nations: Indian peacekeepers serving with the UN mission in the Democratic Republic of Congo have garnered appreciation for their high standard of professionalism and humane approach, with the deployment of the first team of Indian female peacekeepers now promising to serve as an inspiration to women of the Central African nation.

India is the second largest troop contributor to the United Nations Organization Stabilization Mission in the Democratic Republic of the Congo (MONUSCO), with 2,624 peacekeepers and 274 police personnel deployed as of March 2019.

"The image of Indian peacekeepers in Congo is that of a highly competent, humane force that is very very professional. The Indian peacekeepers have been supporting our Congolese friends to have sustainable peace," a high-level Indian military officer deployed with the mission told PTI in a Skype interview. The senior officer's identity has not been revealed as required by authorities in India's Defense Ministry.

The officer added that as one of the founding members of the UN, India's contribution to maintaining international peace and security has been second to none and DRC is no exception.
India was one of the first countries to send its peacekeeping troops in Congo in 1960 as violence started in the country and till date 68 of its soldiers have made the supreme sacrifice in the line of duty in Congo.

"Beginning in the 1960s, our contribution till date has not only been very very substantial but also very vital for the unification of Congo. All our humanitarian efforts and professionalism have drawn acclaim and respect locally as well as internationally," he said of the role and contribution of the Indian peacekeeping contingent. The officer stressed that till the time the Indian contingent is there, its role and effort will be to ensure that minimum number and if possible none at all, human rights violations take place. We will try and ensure that peace prevails in the country, the officer said.

The Indian contingent also welcomed earlier this month the first set of 22 women peacekeepers from India, who began their induction into the mission June 5 as part of a contingent rotation.
"Women in the UN are present in all spectrum of activities, in military, police and citizens. They have a very important role to play as far as societies that are plagued by these kinds of situations. Women in any field, especially in field missions are seen as role models by the local women here, the officer said adding that women peacekeepers inspire women of the countries where they are deployed in contributing to the peace and security of the country.

A young lady officer in the Indian contingent also underscored the critical role that women play in peacekeeping missions, through their expertise and also by being seen as role models for the women in local communities.

"Women broaden the skills available on the ground. Women of the host country are empowered by the presence of women who are in peacekeeping operations. Young girls and women see us as role models. They can push for their rights in a male-dominated society and be a greater part of the peace process," she said. As the first Indian female engagement team arrived in Congo, the young lady officer described it as a big achievement and said a gender-balanced leadership is what will sow seeds of a peaceful society in Congo.
Emphasizing that peace is the pivot, she expressed hope that DRC goes on the path of economic development for a peaceful future for its children.

The high-level Indian military officer stressed that the Indian contingent and other peacekeepers in Congo are focussed on fulfilling the mandate of protection of civilians. "We have taken certain steps that include a revival of local protection committees in far-flung areas where it is slightly time-consuming for us to react. The local communities have to have a stake in their own security, he said.

With the Indian brigade required to govern a huge area of approximately 5 lakh sq km, the officer said challenges in covering almost 26 per cent of the entire DRC includes road connectivity, communication infrastructure as well as dealing with the myriad armed groups.

Of the total 121 armed groups active in DRC, 34 falls under the Indian contingent's area of responsibility. "Inter-armed group clashes leading to human rights violations also pose significant challenges, which the peacekeepers have to address, he said.

Further, with the Ebola epidemic in the Democratic Republic of the Congo now in its 11th month and the number of new cases increasing in recent weeks, the officer voiced concern over the violence targeting the Ebola response team and said providing a sense of security to the teams is a big challenge. The Indian contingent is working with the help of the Congolese armed forces (FARDC) to tackle these challenges.

The Indian officer stressed that peacekeepers need to have a very clear understanding of the nature of conflict wherever they are deployed.

He echoed that the humanitarian efforts and activities by the Indian peacekeepers have not only been appreciated locally but internationally also. The local people see Indian peacekeepers as possessing high competency and a very high level of standard, training and professionalism.

Pakistan to allow PM Modi's plane to fly over its airspace as an exception: Report