Prime Minister Benjamin Netanyahu said that Israel, having killed the Islamic Jihad commander, was not interested in a broader conflict. 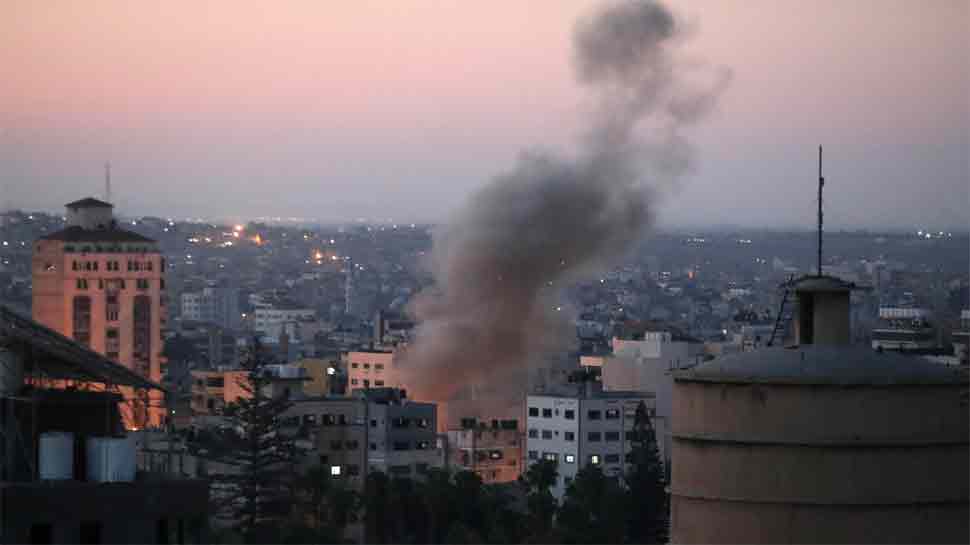 From early morning Gaza militants fired rockets into Israel and the Israeli military struck from the air, resuming after an overnight lull. There were reports of injuries but no deaths inside Israel, where the military said it shot many of the rockets down with air defences.

The bodies of six people were brought to Gaza`s Shifa hospital in taxis and ambulances early Wednesday, as relatives wept and screamed. Medics and witnesses said they were civilians who lived in densely populated neighbourhoods.

In the north of Gaza City, family members said Rafat Ayyad and his two sons Islam, 25, and Ameer, aged 9, were killed by Israeli fire while rushing to hospital to visit another son who had earlier been injured in a separate attack.

"I got wounded and I called my father. He was coming to see me in hospital and two of my brothers were with him on the motorcycle when they were hit by Israel," Loay Ayyad, 18, told Reuters during the funeral.

The Israeli military said that it had struck at least five rocket squads on Wednesday morning. Other targets included a rocket warhead manufacturing facility, an Islamic Jihad headquarters and a weapons storage site. Islamic Jihad confirmed that two of its militants were killed in separate strikes.

DIPLOMATIC EFFORTS
The fighting, the worst in months, erupted on Tuesday after Israel killed Baha Abu Al-Atta, a senior commander of the Iran-backed Islamic Jihad militant group, accusing him of masterminding and planning attacks against Israel.

In response to the killing of Atta and his wife, Islamic Jihad fired about 200 rockets into Israel on Tuesday, resuming on Wednesday morning.

"We will not allow the enemy to return to the policy of cowardly assassination under any circumstances," said a statement by the `Joint Command` of Palestinian armed factions.

The joint command includes Hamas, the much larger Islamist group that controls Gaza. But while Hamas appeared to be giving the green light for Islamic Jihad to continue, the larger group did not appear to be launching rockets itself, a decision that could reduce the likelihood of the violence escalating further.

Hamas and Israel have managed to defuse previous confrontations and to avoid a full-scale conflict for the past five years, following three wars from 2008-2014. In the past Israel has held Hamas responsible for rockets fired by any group in Gaza, but this time it appeared to be avoiding Hamas targets.

UN Middle East peace envoy Nickolay Mladenov said he was "very concerned about the ongoing and serious escalation between Palestinian Islamic Jihad and Israel, following the targeted killing of one of the group’s leaders inside Gaza yesterday.

"The indiscriminate launching of rockets and mortars against population centres is absolutely unacceptable and must stop immediately," he said.

SIRENS AND EXPLOSIONS
The rockets from Gaza sent Israelis rushing to shelters in towns near the Gaza border and deeper in the country, with air raid sirens going off as far north as Tel Aviv and missiles striking Israeli highways and towns.

The Israeli military assembled armoured vehicles along the border with Gaza, though a ground incursion into the territory seemed unlikely at this stage.

Prime Minister Benjamin Netanyahu said that Israel, having killed the Islamic Jihad commander, was not interested in a broader conflict. "We don`t want escalation, but we are responding to every attack against us with a very sharp attack and response. Islamic Jihad best understand that now rather than when it`s too late for it," Netanyahu said.

In Gaza, schools and most government offices remained closed for a second day, as were schools in much of southern Israel.

Israel captured Gaza in a 1967 war and withdrew troops and settlements in 2005. The territory has been controlled since 2007 by Hamas while under an Israeli security blockade, also backed by Egypt. The blockade has wrecked Gaza`s economy, and the United Nations says its 2 million residents have only limited access to electricity, clean water and medicine.