The nuclear summit between US President Donald Trump and Kim Jong Un in Hanoi ended without an agreement. 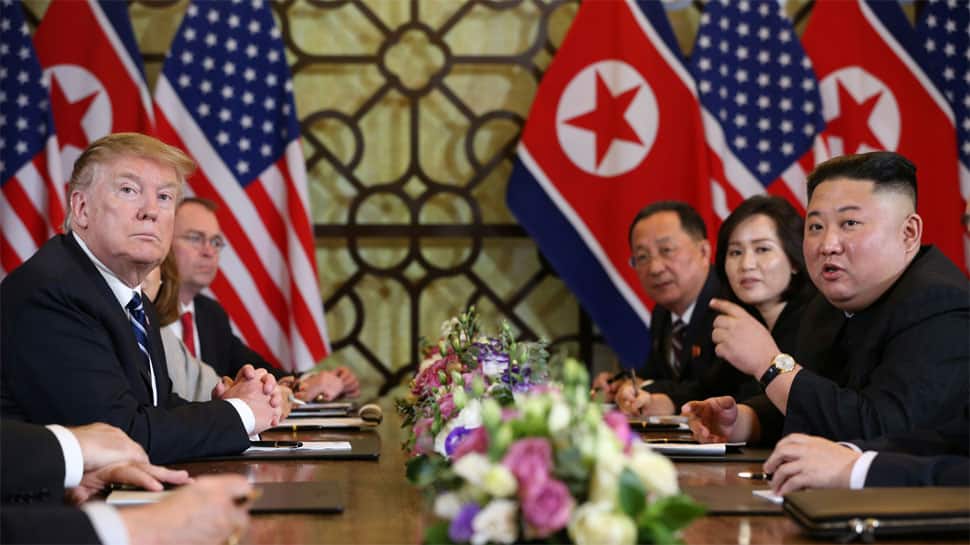 Hanoi: A summit between US President Donald Trump and North Korean leader Kim Jong-un in Vietnam`s capital was cut short on Thursday without any agreement, the White House announced.

Trump and Kim had been scheduled to hold a working lunch before holding a joint press conference later, but those plans were abruptly abandoned around midday.

"The two leaders discussed various ways to advance denuclearisation and economic driven concepts. No agreement was reached at this time, but their respective teams look forward to meeting in the future," White House Press Secretary Sarah Sanders was cited as saying by CNN.

She added that the two leaders had "had very good and constructive meetings".

The original White House programme for the day had planned for a "Joint Agreement Signing Ceremony" as well as a working lunch for the two leaders, but expectations were abruptly dashed with the cancellation of both.

Kim was seen leaving the Metropole hotel in central Hanoi, while Trump`s motorcade also departed from the venue of the summit for the Marriott hotel, where a press conference was scheduled for later.

Reporters at the Metropole hotel were first told that the lunch was delayed, before a White House spokesperson announced there had been "a programme change".

The summit, the second between the two leaders in less than a year, was held to kickstart the stalled denuclearisation of the Korean Peninsula, as agreed at their first meeting in Singapore last year.

Kim and Trump had met earlier on Thursday at the Metropole hotel, during which the North Korean leader had said that he would not have attended the summit if he did not want to denuclearise.

"If I wasn`t willing to do that, I wouldn`t be here right now," Kim said. He also told reporters that he was feeling good about what could be achieved.

"It`s too early to tell but I wouldn`t say that I`m pessimistic. What I feel right now, I do have a feeling that good results will come out," Kim told reporters through a translator.

Trump said he was in "no rush" during the negotiation process, saying: "Speed is not important. What`s important is that we do the right deal."

Diplomacy is the only path to resolve Indo-Pak conflict: US lawmakers